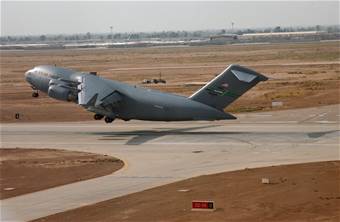 One of the most bitter pills for the Bush administration in the Iraq Study Group's report is the admonition (noted not once but twice) that the U.S. cannot begin to build broad international support for Iraq unless it:

"[R]ejects the notion that the United States seeks to control Iraq's oil, or seeks permanent military bases within Iraq."

And later in the report:

"The President should state that the United States does not seek permanent military bases in Iraq. If the Iraqi government were to request a temporary base or bases, then the U.S. government could consider that request as it would in the case of any other government."

It always has been a long-term objective of the Pentagon to have permanent bases in Iraq because of their strategic location between Syria and Jordan to the west, Turkey to the north, Saudia Arabia to the south, and the big magilla -- Iran -- to the east.

The U.S. has built four "superbases" in Iraq, including the enormous Balad Air Base north of Baghdad. This 15-square-mile minicity is populated by 20,000 troops who seldom see an Iraqi, and has two long runways that handle 27,500 landings and takeoffs a month, second only to London's Heathrow Airport in traffic worldwide.

Because the permanent base issue is so sensitive in Iraq, administration officials have been notably vague when asked about it.

Defense Secretary Rumsfeld has replied that they are "an interesting question" and falls back on the cannard that if the Baghdad government wants the U.S. to stick around when the war is over, it would be happy "to assist them for some period over time."

Well, the war ain't over and won't be over anytime soon.

The ISG report has provided a loophole as big as the C-17 taking off from Balad in the photograph above by tempering its call for a renunciation of permanent bases with a "you can stay if the Iraqis want you to" caveat, but it's hard to imagine Baghdad asking the U.S. to stay.

In any event, President Bush is likely to cherry pick the parts of the report that fit his own narrowly proscribed view. It is hard to imagine him declaring that the U.S. will abandon Balad and the other superbases.
Posted by Shaun Mullen at 6:07 AM
Email ThisBlogThis!Share to TwitterShare to FacebookShare to Pinterest