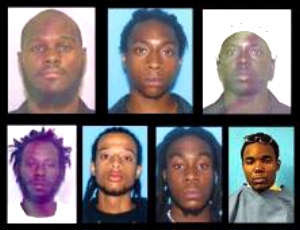 Any alleged terror plot has to be taken seriously, but the Justice Department is amassing a pretty mixed record when it comes to separating the amateurs from the pros.

So it is no surprise that the trial of the Liberty City Seven (photo), whom the government alleged were planning to take a bus from Miami to Chicago and blow up the Sears Tower ended yesterday with one exoneration and six mistrials.

The Justice Department made a collective fool of itself because Attorney General Alberto Gonzalez pulled out all of the public-relations stops and equated these nimrods with the foulest of the Al Qaeda foul. That was just plain silly. No matter, the government plans to retry the six mistrial defendants.

Next up is the Fort Dix Six, a bunch of hard-drinking blue-collar lads who asked cops for maps of military installations, had trouble finding lethal weapons, practiced jihadist attacks by playing paintball in the Pocono Mountains, went to a Kinko's to have a videotape made of their training sessions made into a DVD, and were infiltrated by not one but two informants, include a brainiac who knew the wide open New Jersey Army base "like the back of his hand" because he once delivered pizzas there for his family's restaurant.

A modest prediction: The informants will bomb on the stand and the Fort Dix Six will walk.