Egads! Another War Without a Strategy 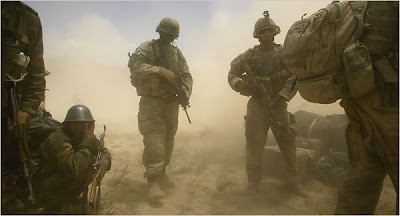 Until the hit on the Surge strategy, the war in was just one bad trip after another. Now, as I noted here the other day, there is a damning calm in Mesopotamia – damning because it is likely a calm before yet another storm since that window of opportunity the Surge has provided for the government to get the national house in order is slamming shut.

The Al-Maliki government, of course, has blown the huge opportunity the Surge represented. And now, reverting to form, there is no U.S. post-Surge strategy as regional warlords and militias grab power right, left and center.

Nevertheless, this "calm" has had the effect of taking Iraq off of the radar screens of those few engaged Americans and the TV screens of all Americans, which leaves the war in Afghanistan, where U.S. and NATO troops continue to take a half a step forward and one step back six years on because of the absence of a viable current strategy there, as well.

The recipe for undoing the early successes in Afghanistan, which supposedly included routing the Taliban, has several ingredients:

* The U.S. never delivered on claims that it would pour zillions of greenbacks into Afghanistan for reconstruction. The reality is that Washington has been downright stingy compared to similar nation-building efforts in Kosovo and Bosnia, to cite two examples. (Irony Alert: The U.S. had made the same claim in 1989 but failed to deliver after the Soviets were sent packing when Bush père was president.)

* The biggest reason that Washington never delivered this time was that it became distracted and then consumed by the Iraq war. No more than 26,000 American troops have been committed to Afghanistan at any given time, while there are six times as many in Iraq. The NATO contingent in Afghanistan totals about 28,000.

* There has been a concommitant diversion of counterterrorism experts and other resources from Afghanistan to Iraq.

* As in Iraq, training up Afghan army and police forces has been painfully slow.

* The Taliban are more resilient than the U.S. has given them credit for. They weren't decimated. They merely slipped over the pourous border with Pakistan, then back again and are raising bloody hell at every opportunity.

* Pakistan, supposedly the U.S.'s staunchest regional ally in the fight again terrorism, has done more harm than good by coddling the Taliban and allowing Al Qaeda a safe haven in the mountainous border region with Afghanistan.

* And that evergreen: Afghanistan is ungovernable.

More U.S. troops have long been seen as the cure for what ails the Afghan mission, but those troops have been slogging away in . Barnett Rubin observes that while more troops might help, "they will just fail more quickly and more messily" if the mission isn't right.

"[I]s the lack of a coherent regional strategy, especially toward Pakistan and Iran, and the failure from the very beginning to invest adequately in governance and development and in any aspect of security but the Afghan National Army. All of these resulted from decisions taken by the Bush administration in 2001-2002, not from our European allies."

The solution being posited among the and those erstwhile European allies is appointing a high-level coordinator.

But Rubin lets the air out of that balloon straight away:

"Such coordination is badly needed. But calling someone a high level coordinator does not enable him to produce high-level coordination. . . . Unless the coordinator presides over a pooled international budget for , including security sector reform, development aid, and counter-narcotics, he will just become another agency that needs to be coordinated. Inevitably, he will be tempted to spend his time hectoring the Afghan government rather than coordinating the international actors."

The key words here are "pooled international budget." That seems to me to be an oxymoron since the U.S. and various European countries have taken a piecemeal approach and are likely to continue to do so, the U.S. especially as Iraq remains a huge distraction.


Photograph by Tyler Hicks/The New York Times
Posted by Shaun Mullen at 5:55 AM
Email ThisBlogThis!Share to TwitterShare to FacebookShare to Pinterest

from Kabul Press:
Aid agencies advised the UN Security Council that the international community’s assumption that Afghanistan can be made peaceful through a combination of military assistance, donor-driven aid, and Western-style democracy fails to attend to the history, society and culture of Afghanistan, a country which has witnessed failed foreign intervention time and again. There is an urgent need at this time to rethink current strategies in the interests of preventing the death of even more Afghans, avoiding large-scale destruction of infrastructure and livelihoods, and increasing chances that what goes on inside and around Afghanistan’s borders does not destabilize regional and global peace efforts.

"We trust the UN Security Council will use our concerns and ideas shared on behalf of ‘we the peoples’ to promote human security rather than continue to act on behalf of many UN Member State governments who unfortunately but increasingly have a tendency in the current GWOT climate to promote national security agendas at all costs.”