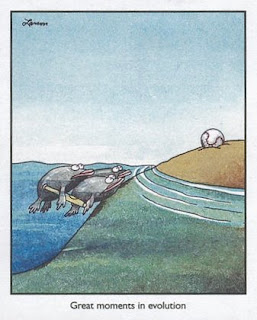 Pesky. There's no other description for evolution. It just keeps evolving. The most recent flap comes from , the state that demonstrated that evolution is not as far along as we'd like to think by sending us George W. Bush. Not that that is the only indication of the state's hostility to the notion of evolution. Others have manifested themselves as well.

It may be recalled that Volcanoes of the Deep Sea, a movie the National Science Foundation and had a role in producing, was described as "blasphemous" by an audience that was given a preview in the Fort Worth Museum of Science and Industry. The film suggested that life might have begun in the undersea vents in an undersea volcano. One viewer said: "I really hate it when the theory of evolution is presented as fact." That viewer was not alone as Christine Castillo Comer will be the first to tell you. Christine has first hand experience with the perils posed by evolution.

Christine has worked in the education system for 36 years. She spent 27 years in the classroom and 9 of them as the Texas Education Agency’s director of science. While working as the director of science she discovered that evolution doesn’t affect everyone equally.

Christine received an e-mail message from the for Science Education announcing that Barbara Forrest, a professor of philosophy at would be giving a talk in . for Science Education is known as a pro-evolution group that thinks evolution happened in the past and is continuing. She sent that notice to a group described as an "online community." That got her fired.

The AP reports that former Arkansas Governor Mike Huckabee has now further explained his lack of belief in evolution.

The story states that he feels students should be given credit for having the intelligence to think through various theories for themselves and come to their own conclusions.

Really? So if my kid thinks through various theories and concludes that humans evolved from, say, bowling pins, that's ok and the teacher gives Little Johnny an extra gold star - for critical thinking - in his Big Chief tablet? We'll go straight to "Every child left behind" in short order.

This campaign is knee-deep in religion, and it’s only going to get worse. I’d thought that the limits of professed public piety had already been achieved during the Republican CNN-YouTube debate when some squirrelly looking guy held up a Bible and asked, "Do you believe every word of this book?"—and not one candidate dared reply: None of your damn business.

Instead, Giuliani, Romney and Huckabee bent a knee and tried appeasement with various interpretations of scriptural literalism. The right answer, the only answer, is that the very question is offensive. The Constitution prohibits any religious test for office. And while that proscribes only government action, the law is also meant to be a teacher. In the same way that civil rights laws established not just the legal but also the moral norm that one simply does not discriminate on the basis of race—changing the practice of one generation and the consciousness of the next—so the constitutional injunction against religious tests is meant to make citizens understand that such tests are profoundly un-American.

According to legend, Hilda turned snakes to stone -- a miracle that one-upped Saint Patrick who merely drove them out of . The creatures in the rock were serpents, the biblical manifestations of Satan, petrified by Hilda's saintly powers.

Today we have a rather different story to account for the "petrified snakes." It is a story that ranges over hundreds of millions of years and all of the oceans of the Earth. It is an evolutionary story that places ammonites squarely within the burgeoning tree of life, of which we ourselves are but a twig on a single branch.

My fossil ammonite was given to me by my geologist daughter. She brought it back from the high -- far, far from and the presumed influence of Hilda. It is manifestly a sea creature, closely related to the chambered nautilus that swims in the oceans today.

One-hundred-and-forty million years ago a great supercontinent that comprised the present lands of , and broke apart. drifted northward, riding on moving slabs of the Earth's crust, from deep southern latitudes, across the equator, toward . My ammonite swam in the ocean that separated from -- lived, died, and was buried in limey sediments on the floor of the sea.

As approached , the floor of the intervening sea was pushed down into the hot interior of the Earth under . The seafloor sediments containing my ammonite were scraped off the oceanic crust and plastered onto .

Cartoon from "The Far Side" © Gary Larson

Astonishing piece from Krauthammer! That's not what I would have predicted. I love the cartoon, too.