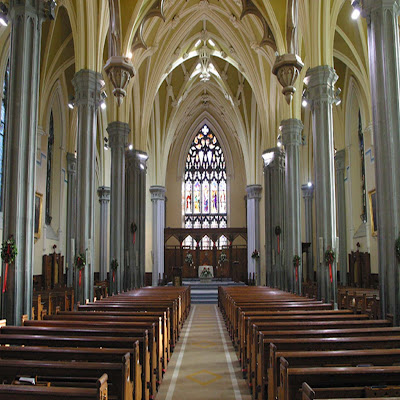 The Senators and Representatives before mentioned, and the Members of the several State Legislatures, and all executive and judicial Officers, both of the United States and of the several States, shall be bound by Oath or Affirmation, to support this Constitution; but no religious Test shall ever be required as a Qualification to any Office or public Trust under the United States.

-- ARTICLE VI, U.S. CONSTITUTION
Make no mistake about it: The biggest reason that religion is playing such an outsized role in this presidential election cycle is because of the insistence of the conservative Christian zealots who hijacked the Republican Party that candidates be judged by their faith.

The comparisons between Mitt Romney's speech this week on his own Mormon faith and John F. Kennedy’s 1960 speech on his Roman Catholicism were bogus. JFK simply wanted to be accepted as an American; Romney wants to be accepted by the zealots.

Baptist minister Mike Huckabee believes that divine providence is responsible for his surge in the polls. (The same presumably will be true when he finishes far back in the pack.) In one of his TV ads, he proclaims that "Faith doesn't just influence me. It really defines me."

Republican presidential wannabes have avidly sought the blessings of Pat Robertson and other televangelists, while speechifying at has become a mandatory campaign stop.

And of course President Bush has suffused his tenure with eschatological underpinnings, promoting the Global War on Terror and its wicked stepchild, the war in , as a modern-day Christian Crusade against people whose religion we are led to believe is shot through with darkness, ignorance and anger.

Romney stood the enduring wisdom of the Founding Fathers on its ear in asserting in his speech that while he championed religious freedom, he would impose a religious test on others. Furthermore, he stated, religion is an essential requisite for freedom.

"Freedom requires religion, just as religion requires freedom," he claimed. "Freedom opens the windows of the soul so that man can discover his most profound beliefs and commune with God. Freedom and religion endure together, or perish alone."

Not that I planned to vote for Romney. He, like Huckabee, won't survive the presidential primary gauntlet. But I am a deeply spiritual person whose parents and grandparents were Jews, Anglicans and Roman Catholics, while my children got a healthy dose of Friends meetings when they were younger and I found myself repeating a Buddhist mantra the last time I was wheeled into a hospital emergency room.

As you may have guessed, I do not consider my freedom loving self – a veteran who bleeds red, white and blue for his country – to be of any particular faith.

How ironic that Mormons probably have been subject to more bigotry than any Christian-oriented faith but Romney does a bigoted turn himself in declaring that I am less than whole. The irony grows richer because a goodly number of those Founding Fathers were Deists, free thinkers and even athiests -- and so apparently were less than whole, too.

None of this would matter terribly much if we didn't need a GOP that welcomed all people, not a party beholden to those who believe Christ was one of their own (but not mine) and would rewrite Article VI of the Constitution to comport with their own zealotry. Which is not so much to tear down the wall between Church and State than enmesh the two.

As it is, the Republican Party is in a helluva fix and probably couldn't hold onto the White House if the Risen Christ was its candidate next year.

The GOP will be up the creek if it doesn't nominate someone who like their president can claim to channel the wisdom of Jesus, but if it does it will further alienate people who don't view religion as a litmus test.

"[The religious conservatives] say we cannot be running out of oil; God makes the climate; and White House explanations about what the United States is doing in Iraq or elsewhere in the Middle East have to square with the fight between good and evil as the end times draw nigh.

"To be sure -- as many believers are sure -- this time the prophecies could truly be on the verge of fulfillment. History, however, suggests that if the hour was not at hand for , , the , or circa 1914, despite their convictions of God's favor and heaven's special attention, then God may also spurn his Republican faithful in and out of . And should religious excess and overambition become part of an epitaph for the twenty-first century , as it did for some of the others, the current GOP national coalition will share in the ignominy."

How ironic that when Romney's father ran for president in 1968 his Mormonism was not an issue, nor was the fact that Morris Udall was a Mormon when he ran in 1976.

Times certainly have changed, and much for the worse.

As Charles Krauthammer notes, the God of the Founding Fathers, the God who is on American coins and currency, "is the ineffable, ecumenical, nonsectarian Providence of the American civil religion whose relation to this blessed land is without appeal to any particular testament or ritual."

From liberal Massachusetts where Romney campaigned on what the electorate wanted to hear, i.e. religious and social tolerance re gays, abortion, etc, to Philadelphia, thoughts of enlightenment heralding reason and science were the philosophical backbone of a great new country.

Voltaire on hearing Romney's new mantra invoked in his "Freedom requires religion" line sat bolt upright. Actually he bumped his head which vexed him all the more.
"Theese Romney fellow is such a slut" he said. "He makes the liar, Karl Rove, seem pristine and chaste in hees willingness to throw the Constitution under the tumbrils."