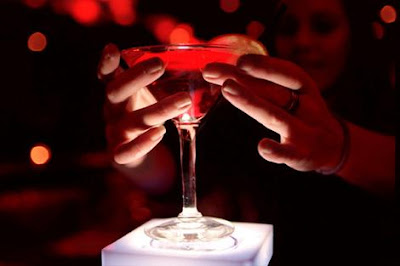 Party season is upon us, so today I thought we'd talk about a subject that affects men and women alike, because we both end up dealing with the wreckage when it happens and the hysteria it causes the rest of the time: drink spiking.

Let me ask you all a question: if modern medicine could make a drug that was odourless, colourless and tasteless and knocked you out for hours, why the hell do sleeping tablets taste so bad?

Why does Aspirin, perhaps the most widely ingested medicine in the world, taste like a sugar-soap thick shake? Why does cough medicine taste like crap?

Why? Because it's almost impossible to make a drug that is odourless, colourless and tasteless and this is the great myth of the drink spiking that lurking behind every night club pillar is a loathsome creep who's armed with this mystery drug.

The Australian Institute of Criminology's "National Project on Drink Spiking" report says that "the term `drink spiking' refers to drugs or alcohol being added to a drink (alcoholic or non-alcoholic) without the consent of the person consuming it." (The italics are mine.)

It is an interesting bubble in our collective morality that we rightly see adding a sleeping tablet to someone's vodka and tonic as wildly irresponsible, yet ordering a 60kg woman a double or triple without their knowledge is just a giggle.

As a woman in a pants suit campaigns to become President of the , others are being killed on the streets of for wearing makeup and not covering their faces.

Religious vigilantes have murdered at least 40 women this year in the southern Iraqi city because of how they dressed, the police chief told AP yesterday, and "dumped in the garbage with notes saying they were killed for un-Islamic behavior."

As American politicians debate the future of the country we invaded almost five years ago, what is happening in , "known for its mixed population and night life" under Saddam Hussein, is a chilling reminder of what we will leave behind, no matter how well the Surge works.

If there really is some kind of anthropomorphic God who watches what we do, then perhaps all we really are here for is to be the cosmic equivalent of some crappy, low budget network sitcom designed to entertain the tired old deity, sitting on some beer stained couch in his underwear after a long day on the loading dock, eating cheese doodles and slapping his hairy thighs as the buffoon, Mike Huckabee, tells us that the problem with the United States is that we aren't religious enough.

For an administration eager to promote policies of free trade and free markets, the Bush White House seems unwilling to live by its consequences. Instead of allowing the mortgage market to operate freely, the Treasury Department will force lenders to freeze adjustable-rate mortgages at artificially low interest rates to keep bad loans from defaulting -- at least for now. The five-year freeze essentially removes the obvious inherent risk of ARMs, forcing lenders to further subsidize those who chose unwisely.

Without a great deal of fanfare, the new Labor government in Australia has ended the shameful "Pacific solution" under which refugees were held in offshore camps, located on the territory of neighbouring countries which the Australian government bullied and bribed into hosting them. Most of the refugees held at the camp have been allowed to settle in .

The "Pacific solution" and Labor's failure to come up with an adequate response under the hapless Kim Beazley was a major factor in the Howard government’s election victory in 2001.

Defenders of the Howard government can make whatever claims they like about this evil system, whether to say that it was justified by results or to claim that Labor’s policy isn’t really all that different. The fact remains that this was a cruel and brutal response to community panic; panic the government itself did a great deal to stir up, and even more to exploit politically. Those responsible, most notably Howard himself, will carry the stain of the Pacific solution to their graves and beyond.

Maybe some people do want to be New Formalists after all. (I'm suddenly feeling better about the label myself!) At any rate everyone, it seems, has an opinion on form. And the poster child of form has to be the sonnet. We are in the midst of a sonnet explosion arguably on a par with the great 19th century revival. (The form had fallen into a rare desuetude during the previous century.) And yes, as in any age, there are slews of bad or boring or in-competent or merely-competent sonnets being written, but many that are exciting, powerful, new.