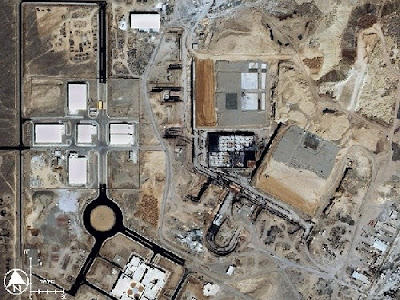 Monday could have been a rare good day for President Bush. Instead it was yet another embarrassment.

With a National Intelligence Estimate concluding that Iran's nuclear weapons program had been suspended in 2003, the White House could have plausibly made the case that Iran's reversal of course was a result of it being intimidated by the U.S. takedown of its arch enemy -- the Saddam Hussein regime. Recall that Tehran tried to reach out to Washington back then.

But the opportunity to make political and diplomatic hay over news that Iran backed down already had been squandered and then some by the Dick Cheney-led cheerleading for a pre-emptive military strike against a target that may not exist. (Why does that sound so familiar?)

There are indications that Cheney tried to suppress the NIE findings, which the White House has known about for at a month or two as the noise machine shifted into higher gear with "leaked" reports of fleet maneuvers in the Persian Gulf and preparations for military strikes. When the veep was unable to halt release of a summary of the report, he successfully blocked release of key findings that would further embarrass the administration.

And then National Security Advisor Stephen Hadley delivered the coup de grâce by claiming that the report didn't undercut the administration's hysterical war-drum beating. Besides which, it wasn't completed until a few days ago. (Wink, wink. Nod, nod.)


Yesterday's shocker seems less so when you reread a piece last May in The New Yorker by Seymour Hersh. Money quotes:

"Inside the Pentagon, senior commanders have increasingly challenged the President’s plans . . . A crucial issue in the military’s dissent, the officers said, is the fact that American and European intelligence agencies have not found specific evidence of clandestine activities or hidden facilities; the war planners are not sure what to hit. . . . [A] high-ranking general added that the military’s experience in , where intelligence on weapons of mass destruction was deeply flawed, has affected its approach to . 'We built this big monster with , and there was nothing there. This is son of ,' he said."

Reaction to the NIE was, of course, all over the lot.
Some bloggers praised the administration, while others saw darker motives. I myself remain suspicious of just about everyone, most notably the intelligence community and the Iranian mullahcracy.

America's spooks have put together a truly pathetic record over the years, ranging from failing to anticipate the collapse of the Soviet Union and the 9/11 threat to being diddled by Saddam over what turned out to be his nonexistent nukes program, as well as willingly allowing themselves to be used as political pawns.

And so while I would like to share the sense of relief many people seem to feel, I am unable to do so. Besides which, Iran could restart its nuclear weapons program tomorrow -- or maybe already did yesterday amid great glee with the release of the intelligence report -- since it continues to enrich uranium.

Congress, of course, was dithering while all of this was going on. If there are any good guys, it may be those weapons inspectors from the International Atomic Energy Agency who had it right with Iraq and apparently had it right with Iran, as well. Nevertheless, the agency has been viewed as demon spawn by the U.S., which intercepted dozens of its director general's phone calls with Iranian diplomats in an unsuccessful effort to have him ousted.

The big lesson from Monday is that while not exactly a law of nature, it is axiomatic that opportunities to occupy the high ground tend to get squandered when politics are put ahead of policy.

So now the White House has effectively undercut itself on what it wanted to be the dominant foreign policy issue of the last year of the Reign of Bush.

The NIE blockbuster is yet another example of an administration so fundamentally disingenuous -- and more than occasionally dishonest -- that what passes for the high ground is the boiler room and warmongering is the ready substitute for diplomacy.

Posted by Shaun Mullen at 6:42 AM
Email ThisBlogThis!Share to TwitterShare to FacebookShare to Pinterest

Shaun, know how you know a great Blog? Well you visit it the first thing in the morning, and had an idea before going there what you were going to post on your Blog, and you find that not only what was written captured what you were thinking buit did it in such a great way the need to write it is no leader needed. Great job on this one.

Yes, it is unfortunate from the hawkish neo-con standpoint that the published evidence doesn't match their hopes. It will be harder for them to ignore this one.