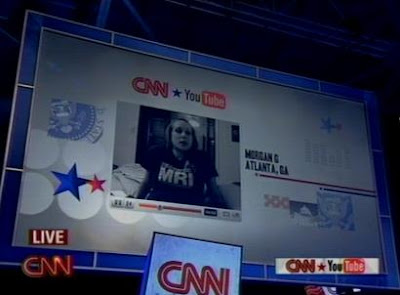 Selecting a president is, more than ever, a life and death business, and a news organization that consciously injects itself into the process, as CNN did by hosting Wednesday's debate, incurs a special responsibility to conduct itself in a dispassionate and, most of all, disinterested fashion. When one considers CNN's performance, however, the adjectives that leap to mind are corrupt and incompetent.

Corruption is a strong word. But consider these facts: The gimmick behind Wednesday's debate was that the questions would be selected from those that ordinary Americans submitted to the video sharing Internet website YouTube, which is owned by Google. According to CNN, its staff culled through 5,000 submissions to select the handful that were put to the candidates. That process essentially puts the lie to the vox populi aura the association with YouTube was meant to create. When producers exercise that level of selectivity, the questions -- whoever initially formulated and recorded them -- actually are theirs.

That's where things begin to get troubling, because CNN chose to devote the first 35 minutes of this critical debate to a single issue -- immigration. Now, if that leaves you scratching your head, it's probably because you're included in the 96% of Americans who do not think immigration is the most important issue confronting this country.

Don't ever say the Bush administration doesn’t take care of its own. Nearly three years after Paul Wolfowitz resigned as deputy Defense secretary and six months after his stormy departure as president of the World Bank—amid allegations that he improperly awarded a raise to his girlfriend—he’s in line to return to public service.

Secretary of State Condoleezza Rice has offered Wolfowitz, a prime architect of the Iraq War, a position as chairman of the International Security Advisory Board, a prestigious State Department panel, according to two department sources who declined to be identified discussing personnel matters. The 18-member panel, which has access to highly classified intelligence, advises Rice on disarmament, nuclear proliferation, WMD issues and other matters. "We think he is well suited and will do an excellent job," said one senior official.

The only truly good news to come from would be good news regarding the political landscape. And there, is still beset with problems. . . . .

What the recent publicity about the "success" of the troop surge has ignored is this: The Bush administration has downplayed the collapsing political situation in by directing the public's attention to fluctuating numbers of civilians killed. While there have been some relative gains in security recently, even there the picture remains dubious. The Iraqi ministry of health, long known for cooking the books, says that a few hundred Iraqis were killed in political violence in November. However, independent observers such as Iraq Body Count cite a much higher number -- some 1,100 civilians killed in in November. They reported that bombings and assassinations accounted for 63 persons on Saturday, the first day of December, alone.

In a 2001 survey conducted by Mark Peffley and John Hurwitz, a random subset of whites was asked:

"Do you favor or oppose the death penalty for persons convicted of murder?"

Another random subset of whites was asked:

That is a 12-point increase in overall support.

Fifty-two percent of Americans say the economy and health care are most important to them in choosing a president, compared with 34% who cite terrorism and social and moral issues, according to the latest Wall Street Journal/NBC News poll. That is the reverse of the percentages recorded just before the 2004 election. The poll also shows that voters see health care eclipsing the war for the first time as the issue most urgently requiring a new approach.

What could be called "The Huckabee Moment" occurred Sunday morning when ABC's George Stephanopoulos asked the former governor, suddenly and ominously the front-runner in 's GOP contest, whether Mitt Romney is a Christian. Mike Huckabee knew precisely what was being asked of him, and he also knew, because he is a preacher, what the right -- not the clever, mind you -- answer should be. But Huckabee merely smiled that wonderful smile of his and punted. This, with apologies to George W. Bush, is the soft demagoguery of low expectations.