Hillary, Politics & The Beast of Beauty 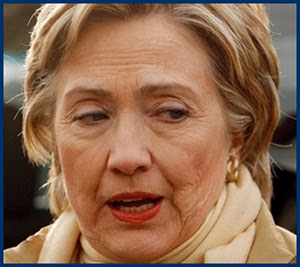 Did you know that this blogger finds older women who don't have plastic surgery, get Botoxed or otherwise try to hold back the inevitable consequences of physical aging more attractive than those who look like they walked off the set of Extreme Makeover?

No, you probably didn't. But then that shouldn't matter.

Mind you, I believe that a woman can do or not do whatever she damned well pleases with her appearance, and an older woman certainly has more than earned that right. Which brings me to the brouhaha surrounding this photo of Hillary Clinton. In a moment.

You probably also didn't know that Mrs. Clinton is not my type. Not that that should matter either.

I've been smitten by women who wouldn't be confused with a 60-something Julie Christie but radiate a beauty from within that is quite transfixing. (Christie happens to do both, at least on the screen.) Mrs. Clinton leaves me cold, while the photo's initial publication at the Drudge Report website with malicious intent leaves me disgusted that the old double standard regarding how women and men look is alive and thriving in Campaign '08.

Mrs. Clinton, who turned 60 in October, obviously is showing wear and tear, as well as some wrinkles.

This prompted a misogynist blogger who goes by the handle "XWL" to opine at Immodest Proposal that the photo is "the most significant" of the year because:

"There's no recovering from that, image isn't everything, but it counts for a lot, and her image in that photo isn't the image most Americans would want us to project as a nation. You don't have to be wrinkle free to be president, but you can't look haggard and bedraggled, either."

Ed Morrissey asks at Captains Quarters whether the photo will indeed derail her bid:

"Have political campaigns become the equivalent of beauty contests for both men and women, and if so, can women get a fair shake at an age where candidates have the requisite experience?"

I think women can get a fair shake most of the time and use Elizabeth Dole as a reference. But this is Hillary and she is getting the kind of scrutiny no one on the public stage deserves this side of image freakazoids like Brittney Spears and Paris Hilton.

Viagra jokes aside, Mrs. Dole never was subjected to the kind of scrutiny Mrs. Clinton is getting when she was the wife of a senator and presidential wannabe and later as a presidential wannabe herself. And while we're at it, Fred Thompson ain't no glamourpuss, while John Kerry didn't get any closer to the White House in 2004 after Botoxing his wrinkles away.

"It's like almost an addiction that some people have to what I call the perfection that presents of successful, beautiful, fun-loving people. So the question is this: Will this country want to actually watch a woman get older before their eyes on a daily basis?"

My answer is that while Christie surely would agree that beauty is the tail that wags the dog and former actor Thompson would tell you he never was leading man material, I don’t think such a consideration is much of a factor in politics.

One exception is the Anchoress, who sums things up thusly:

"Some are wondering if showing such a picture helps Hillary by inspiring pity or hurts her. I think it’s a wash -- some will be small and pathetic and laugh at her for daring to look like a 60 year old woman, some will admire her. I happen to think it’s a good picture, not 'flattering' but so much more interesting and human than most of her photos.

"Perhaps showing a woman wearing her miles on her face will help to erase the double standard that says men may be permitted to age gracefully while women must remain freakishly unlined, dewy and firm."

I wish that were so, but I'm not holding my breath.
Posted by Shaun Mullen at 1:11 PM
Email ThisBlogThis!Share to TwitterShare to FacebookShare to Pinterest

I no Hillary fan, but this is one time I am standing up for her against an obvious photo-shopped hit. Over on my blog, The Pink Flamingo, last night I started comparing photos of Hillary. Something is obviously fishy about the whole photo. I have a photo taken the following day. Unless she has had a face lift, or the best makeup and skin treatment in the world, someone has done a very nasty number on her. If the same thing had been done to a conservative woman, the whole conservative world would be up in arms. Since it is Hillary, no one is saying a thing.

Golda Meir was a babe in my book ....getting the job done is an aphrodisiac for me.

Hillary there looks she need some beauty tips for women .

As Mrs. Clinton says, she find physical aging more attractive than those older women have their medical treatment. For time and budget saving here are some beauty tips for women.