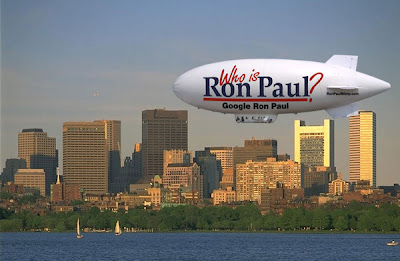 THE YOU KNOW WHO BLIMP. MORE HERE.

ne durable Republican staple is the alleged commitment to "small government." I've heard this repeatedly during the GOP presidential debates. The candidates declare that the feds should butt out, that "one size fits all" policies enacted by would burden the states. On everything from guns to abortion, the GOP politicians say that states should be allowed to come up with solutions that reflect the will of their own people. This is supposed to be a cornerstone of the conservative ethos.

But it's really just pap for the stump. In reality, and for a fresh insight into contemporary Republican hypocrisy, let us behold (yet again) the Bush administration in action.

A couple days ago, the Bush team - acting through the Environmental Protection Agency, in violation of the law that created the EPA, and in defiance of federal court rulings - decreed that the state of , and 16 other states, would not be permitted to act on their own to reduce global warming emissions from automobiles. The EPA explained that it favors a "national solution" (i.e. one size fits all), over what it calls "a confusing patchwork of state rules."

The catch, of course, is that the EPA - once considered a protector of the environment, before the Bush team go ahold of it - has no interest in a "national solution" to cut the carbon-dioxide emissions that contribute to global warming.

"Who is your favorite author?" Aleya Deatsch, 7, of asked Mr. Huckabee in one of those posing-like-a-shopping-mall-Santa moments.

In an interview afterward with the news media, Aleya said she was somewhat surprised. She thought the candidate would be reading at a higher level.

If you were building a Republican presidential candidate from a kit, imagine what pieces you might use: an athletic build, ramrod posture, Reaganesque hair, a charismatic speaking style and a crisp dark suit. You'd add a beautiful wife and family, a wildly successful business career and just enough executive government experience. You'd pour in some old GOP bromides - spending cuts and lower taxes - plus some new positions for 2008: anti-immigrant rhetoric and a focus on faith.

Add it all up and you get Mitt Romney, a disquieting figure who sure looks like the next president and most surely must be stopped.