Meanwhile, Back At The Business Deal . . . Er, The War: News From & About Iraq 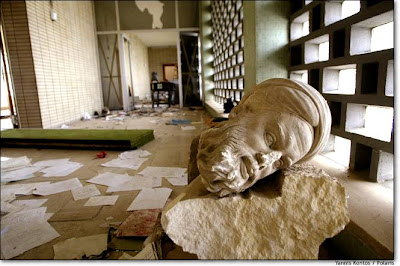 From the March 2003 invasion through to the here and now, the story line for the war has been one of stops and starts, peaks and valleys, and upheavals and calms.

By this reckoning we are now in an extended calm. The Surge has substantially met its military goals, U.S. and civilian deaths are way down, Bush and Al-Maliki have signed a deal that gives new meaning to back scratching, and refugees are cautiously making their way back to their now walled neighborhoods – if they still exist.

But this is a damning calm – and likely a calm before yet another storm.

This is because that window of opportunity the Surge was supposed to provide for the government to reconcile and consolidate has pretty much closed as regional warlords, armed and abetted by a feckless that is flying without a wing, prayer or strategy, are quickly consolidating their power.

Is a warlord state preferable to no state at all?

The cynical answer is "of course." This is because both Washington and Baghdad have gotten what they want in the form of that business deal: The corrupt weakling Al-Maliki gets long-term coup insurance in the form of U.S. troops stationed at permanent bases and the mighty U.S. gets first dibs at Iraq's vast untapped oil riches.

A headline in the Los Angeles Times captures the current edition of the conundrum well:

"The troop buildup in was meant to freeze the country's civil war so political leaders could rebuild their fractured nation. Ten months later, the country's bloodshed has dropped, but the military strategy has failed to reverse 's disintegration into areas dominated by militias, tribes and parties, with a weak central government struggling to assert its influence.

"In the south, Shiite Muslim militias are at war over the lucrative oil resources in the region. To the west, in Anbar province, Sunni Arab tribes that once fought forces now help police the streets and control the highways to and . In the north, Arabs, Kurds and Turkmens are locked in a battle for the regions around and . In , blast walls partition neighborhoods policed by Sunni paramilitary groups and Shiite militias."

One of life's lessons is learning to settle for less.

But even for those of us who never believed that the Bush administration's grandiose vision of Iraq being a beacon of democracy could succeed, settling for a failed state is a bitter pill.

THE MEMORY HOLE
I was an early but soon disillusioned supporter of the invasion, but have never lost sight of the need to support the warriors if not the war.

Of the hundreds of posts that I have done on , a goodly number have focused on those too often underappreciated boots on the ground who have sacrificed while has fiddled and diddled.

This bring me to the story of the six Army troopers who collectively penned a New York Times op-ed piece in August in which they argued in carefully chosen words that the Iraq war simply cannot be won on American terms.

Nothing that has happened since then has proven them to be wrong. And tragically, "them" is now only four soldiers: Two were killed, one before the piece was published, and another was severely wounded.

"What struck me in our conversation was that these two soldiers were not completely disillusioned with the Army or with the difficult type of warfare that forced on them. One of them had recently been promoted and plans to stay in the Army; the other admitted that he wanted to go back to . They hope to write, with other soldiers, a book about counterinsurgency that would examine the Army’s new field manual against their experience fighting the complex array of warring factions in —not to refute it but to improve it. In short, they’re exactly the sort of soldiers the Army needs to keep. I wonder how long their precious knowledge will be valued by a military and a country that already show signs of wanting to consign to the memory hole where, three decades ago, disappeared."

More here.
SUCH A DEAL!
The capitulation of Congressional Democrats on Iraq seemed all but complete with the impending approval of a half-trillion-dollar spending bill that will include billions of dollars for the war without the troop withdrawal timelines that President Bush has adamantly refused to accept.

The Democrats' capitulation cost a measley $11 billion – the amount of domestic spending above what the White House had requested.

But now the legislation has gotten hung up over name calling. Merely a temporary setback, I'm sure.

AS BASRA GOES SO GOES IRAQ?

city was once 's most cosmopolitan. Smack dab in the middle of the southern oil hub, its nightlife was legendary. But today hangs in the balance and its inhabitants are more like prisoners than residents.

Shiite militias roam the city center and the few remaining British troops are confined to an airbase outside the city. The militias claim that have reached a truce and Iraqi authorities claim that they will be ready to take over when the British pull out for good, but skeptics abound. (Meanwhile, 27 people were killed and over 100 wounded today in a series of bombings in Amara in adjacent Maysan Province where the Brits had patrolled until recently.)

Then there is the not small matter of women in Basra: At least 40, including a Christian, have been murdered in the last year by religious vigilantes because they were not wearing head scarves known as hijab.

Megan McArdle, who is comfily to the right of most of The Atlantic's bloggers when it comes to the war, writes that it's time for doves to accept that things have improved:

"I am, as readers know, generally of the opinion that the Iraq War has been a clusterbomb of badly made decisions leading to even worse outcomes. And those who opposed the war had every right to become frustrated and angry when the war's more gung-ho supporters refused to acknowlege evidence that things were going very, very badly.

"Lately, however, the anti-war side is beginning to sound a lot like the boosters they were so angry at."

Fair enough, Megan, but I think that must have fallen off of your map of . It might be on the floor along with all those broken dreams.

Posted by Shaun Mullen at 5:41 AM
Email ThisBlogThis!Share to TwitterShare to FacebookShare to Pinterest

Shiite fundamentalist vigilantism is a problem, but it is being addressed. Last year it did not seem possible that Sunni opposition would have changed so dramatically. Al-Sadr seems to have disappeared as an effective military force. Maybe it is not outrageous to hope that Christians will be back selling booze in Basra next year. That's one of the things that's happening in Baghdad. (Funny metric of progress, I guess.) Tolerance is hard to learn, but the Kurds have been for it all along and now the Anbar Sunnis, at least, have rejected Al Qaeda levels of intolerance.

You should be aware that not everyone is convinced that there was substantial looting from the Iraq National Museum, much less that the US government was responsible. Frank Warner has written numerous pieces on the subject. I'm not sure why it bothers him so much.