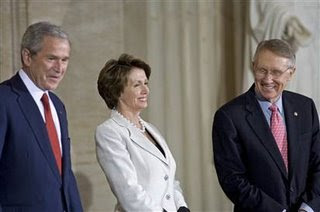 The first Democratic-led Congress in a dozen years limped out of last night with a lengthy list of accomplishments, from the first increase in fuel-efficiency standards in a generation to the first minimum-wage hike in a decade.

But Democrats' failure to address the central issues that swept them to power left even the most partisan of them dissatisfied and Congress mired at a historic low in public esteem.

Before leaving for Thanksgiving, Congressional Democrats promised not to give President Bush more money for without deadlines for withdrawal.

Now they are slinking out of for Christmas after providing $70 billion in unrestricted funds for and .

"When is enough enough?" asked Ted Kennedy, who supported an amendment to require troop withdrawal from and a cutoff of combat funds within nine months. "I urge my colleagues to vote against this gigantic blank check." By a vote of 76-17, they didn't.

Russ Feingold's troop-withdrawal amendment failed by 74-21. None of the Democratic Presidential candidates was there to support it.

The Republican Senate minority . . . sett a modern-day record for blocking the most legislation during a congressional session. A new report released today by the Campaign for 's Future details the 62 times conservatives have used the filibuster to block legislation (or force modification of bills) in the first session of the 110th Congress. In just the first year of this two-year Congress, their use of the filibuster in the Senate topped the previous record, reached during the entire 107th Congress.

For Congressional Democrats, the first session of the 110th Congress offered a sobering lesson in the practical limits of majority control. Democrats delivered part of what they had promised to the voters who returned them to power last November and recorded some significant achievements. But more often, Democrats found their legislative plans stymied -- first by Senate Republicans' willingness to filibuster any proposal with which they disagreed, then by the president's newfound zeal to exercise his veto power. The scorecard, in the end, is disappointingly mixed. Still, Democrats are more to blame for overpromising than for failing to deliver; their triumphant promises of January were never realistic. Given the slenderest of Senate majorities and the willingness of the minority to wield the filibuster with unprecedented frequency, Democrats' maneuvering room was dramatically limited.

When we examine the history of modern torture technique by technique - and there are dozens of examples - we find that newer, "cleaner" tortures first appear in conditions of public monitoring, usually in democratic states. It is only afterward that we find authoritarian states adopting them.

If the spread of torture techniques suggests a blurry line between "us" and "them," it also teaches that there's no real boundary between "there" and "here." It would be ignoring history to assume that what happens in an American-run prison in will stay in . Soldiers who learn torture techniques abroad get jobs as police when they return, and the new developments in torture you read about today could yet be employed in a neighborhood near you.