Putting the Anbar Awakening to Sleep 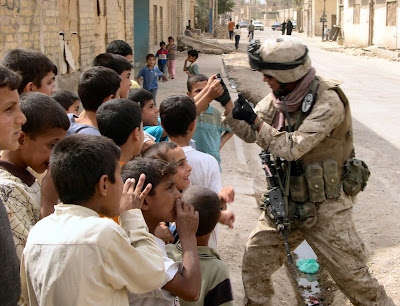 A U.S. MARINE JOKES WITH CHILDREN IN ANBAR

You gotta love that Nouri Al-Maliki. Given free rein by the to thumb his nose at the opportunity the relative success of the Surge provides for trying to heal those pesky national wounds, the prime minister yet again proves how adept he is at playing the Bush administration for a fool.

Al-Maliki’s Shiite-led government has announced that it plans to dismantle the Sunni militias the U.S. funded, armed and nurtured into opposing Al Qaeda in Mesopotamia, most of them in Anbar Province, because it does not want them to become separate military forces.

The militias, more than 70,000 strong and often made up of former insurgents, are known as Awakening Councils, or Concerned Local Citizens.

The groups will not even be allowed to have any infrastructure such as headquarters buildings that would give them long-term legitimacy.

The declaration was met with anger by Sheik Hate Ail, a tribal leader who helped form one of the groups in western Anbar.

"We've kicked Al Qaeda out and we don't want chaos to take their place," the sheik said, adding that the Bagh government should not "brazenly exploit the sacrifices of these Iraqi'' fighters and "should absorb these people, not reject them and send them away.''