Condomnation For the Britney Spears Clan 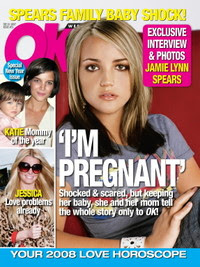 This just in: Teenaged girls have sex. And sometimes they get pregnant.

Don't tell the abstinence-only crowd at the White House, but these disturbing realities led to serial embarrassments this week for the family of Mother of the Year contender Britney Spears.

Father-to-be Casey Aldridge, 19, could face a statutory rape charge because knocking up anyone under 17 is considered "felony carnal knowledge of a juvenile" in their home state of .

Jamie Lynn's father is "furious" that she sold the story of her pregnancy to OK! magazine, while Britney is "frantic" about the whole mess and not at all pleased that Kevin "Fed Ex" Federline, her former husband, was told first.

If that wasn't bad enough, there is the beyond crushing news that mother Lynne Spears' forthcoming book on parenting, Pop Culture Mom: A Real Story of Fame and Family in a Tabloid World, has been put on ice by Thomas Nelson, who publishes inspirational books and Bibles.

Janice Min, veteran celebrity watcher and editor of US Weekly, huffed: "To have a woman preparing to write a book about how to raise daughters when her own two daughters are imploding reeks of incredible denial and a lack of self-awareness."

Shall we now have a name change to "E-Kiko" or "E-Shaun?"

Here's one of my old posts on Condoms, abstinence, etc.

I have this vision of acolytes preparing the Pope's food in the Vatican kitchens.
In this day and age they are appropriately wearing latex sheaths on their hands. Each finger is covered; ten little condoms for the Pope's oral hygiene.
But when it comes to genitalia..icky, icky...Pius and Paul...forswear protection in Christ's name...you'all.