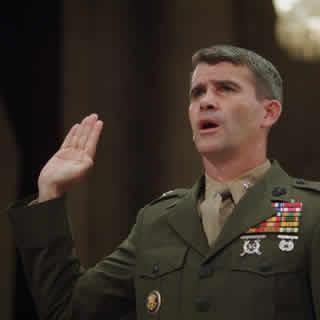 For those of you too young or too distracted to remember, the Ollie North-Iran Contra affair is worth reprising in light of the CIA terrorist interrogation tapes scandal.

Long story short, North was the Reagan administration's point man in the sale of weapons via a covert network that included intermediaries in , of all places, to the Contras in .

Reagan fired the Marine lieutenant colonel after the illegal sales became public in 1986. In a scene that still makes conservatives all weepy, North defended his conduct before a televised Congressional hearing (photo). Although he was indicted and convicted on several felony counts, including the destruction of documents on his orders by Fawn Hall, his secretary, he never saw the inside of a prison cell and all charges were dismissed because he had been immunized by Congress before spilling his guts.

Fast forward two decades to the revelation that despite explicit warnings from on high, Jose A. Rodriguez, the chief of the CIA's clandestine service, ordered the destruction of hundreds of hours of videotapes showing the brutal interrogations of two Al Qaeda operatives in an apparent effort to protect his case officers from personal danger, possible prosecution or both. Rodriguez, like North, already is being called an "American hero" for what arguably is just as egregious violation of his responsibilities.

Which begs the question: Will politics trump the rule of law as they so often have?