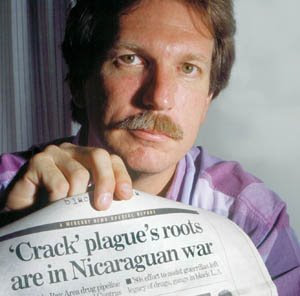 I have worked with a goodly number of great investigative journalists over the years, men and women who risk career, life and limb to get the story, and I can say with some satisfaction that this bunch usually did.

But beyond the glamour of the Woodward and Bernstein portrayed by Redford and Hoffman in All the President's Men is a dark side: Investigative reporters and their editors can be an intensely jealous lot, and except for the biggest stories (like the Pentagon Papers, Watergate and the My Lai Massacre) rival papers are more apt to ignore an investigative story than mention it in their own pages, and sometimes even dump on it.

This brings me to one of the greatest investigative coups and most shameful episodes in modern American journalism -- the August 1996 publication of a three-part series titled "Dark Alliance" by reporter Gary Webb in the pages of the San Jose Mercury News and what then transpired. I do so in memory of Webb, who took his own life three years ago this week.

I didn't know Webb professionally, although I did spend an evening with him drinking beer and listening to a zydeco band at a music club while attending a conference for investigative reporters and editors. But I knew him by reputation to be an ace reporter, so it was no surprise when the Mercury News rolled out his extraordinary series linking the CIA and Nicaragua's Contras to the crack cocaine epidemic in South Los Angeles in the 1980s.

"Most of the nation's elite newspapers at first ignored the story. A public uproar, especially among urban African Americans, forced them to respond. What followed was one of the most bizarre, unseemly and ultimately tragic scandals in the annals of American journalism, one in which top news organizations closed ranks to debunk claims Webb never made, ridicule assertions that turned out to be true and ignore corroborating evidence when it came to light."

"Two years before Webb's series, The Los Angeles Times estimated that at its peak, Ross' 'coast-to-coast conglomerate' was selling half a million crack rocks per day. '[I]f there was one outlaw capitalist most responsible for flooding Los Angeles' streets with mass-marketed cocaine,' the article stated, 'his name was Freeway Rick.'

"But after Webb's reporting tied Ross to the Nicaraguans and showed that they had CIA connections, The Times downgraded Ross' role to that of one 'dominant figure' among many. It dedicated 17 reporters and 20,000 words to a three-day rebuttal to 'Dark Alliance' that also included a lengthy musing on whether African Americans disproportionately believe in conspiracy theories."

The original "Dark Alliance" series can be found here. Eric Umanski aggressively covered the CIA-Contra-crack connection for Mother Jones and asserts here that it was established long before "Dark Alliance." Meanwhile, for my musings on Don Bolles, an investigative reporter who made the ultimate sacrifice, click here.
Posted by Shaun Mullen at 5:59 AM
Email ThisBlogThis!Share to TwitterShare to FacebookShare to Pinterest

Thanks for the reminder of this story, which got buried. It tied in with the whole Iran-Contra crime, where the Repub's began their assault on the constitution.

The existence of the CIA represents an acknowledgment that sometimes the ends justify the means. Americans in general are ambivalent on that issue. The CIA has been the home of ideologues who lean toward active solutions to intractable problems. I don't believe we should abolish the CIA, but there should be broad representation in the oversight groups to keep a check on its excesses.

As far as truth in the media, you might want to read this article on the looting of the Iraq National Museum.

Interesting indeed. The deeper I dig into the CIA and the Bush family tree the more absurd it becomes. By walking the road of the end justifies the means the good guys have become what they were created to oppose.