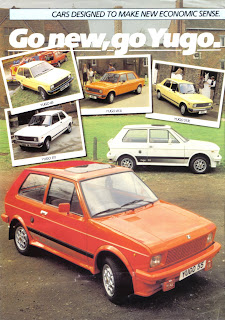 Yugo introduced its unreliable, underpowered, hopelessly antiquated GV hatchback in 1986 to worldwide jeering and derision, a level of scorn that only grew as people became more familiar with the intrinsic problems with an ancient Fiat design assembled with the meticulous disregard and thorough apathy of 's Zastava auto group.

The GV's carbureted, 61-horsepower four-cylinder engine, its antediluvian suspension design, and four-speed manual transmission were part of the problem. The remainder of the car constituted the rest of the problem.

In response to the deafening lack of demand for a performance variant of the GV came the GVX--a hot-rod Yugo that thoroughly failed to meet even the dimmest expectations.

The extensive revision and customization process added alloy wheels, a stripe of metallic paint along the bottom of the side rocker panels, a sport steering wheel, and a dizzying array of engine revisions that boosted available power from 61 horsepower to, well, 61 horsepower. These modifications had all the enhancing effect one would expect from spraying Lysol into a vat of raw sewage.

The Yugo, of course, has become known as a car symbolizing tremendous awfulness of an unprecedented degree. The existence of a "sport" edition that didn't actually add any sport makes the car all the worse.

My uncle has a classic line--he says that the Yugo's optional rear-window defroster is useful mostly to keep your hands warm when you're pushing it.