Quotes From Around Yon Musicsphere 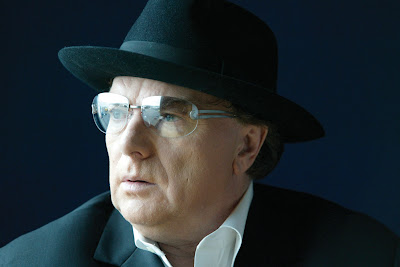 For my money, the singer-songwriter-poet among my contemporaries, that both hooks the ear and brings the music is Van Morrison. Not only for his ability to play his voice like some transoceanic jazz choir, nor his manner of mining the blues and jazz traditions and his own life, but also because -- like Dylan -- he endures. Not only that, but he reports back. And like a few others in music, painting and writing, the arc of his life seems to resonate with mine. It may be just a fluke of years lived in the same unfolding history, but it seems like more. It seems, as it always seems with the great souls, that there's an emotional and spiritual concordance happening, as one bell might pick up the tone of another nearby even though it has not itself been struck.

Every dedicated Phish fan has a favorite "Tweezer." Some like the older versions that are strange and quirky, some like their Tweezers as funky as possible, and others like them super spacey. Of course, because this song has long been considered one of the band’s biggest "jam vehicles," there are many versions of "Tweezer" that feature any and all styles of Phish improvisation . . .

Somewhere there’s a woman who carries a hand-held cassette recorder wherever she goes. She records ideas for songs as they come to her, fragments of melody with her voice. When I first met her, I thought this was an affectation and I didn’t like it; I wished that she’d stop. Later, I realized that she was more unselfconscious than I’d given her credit for, just her unembarrassed embarrassing self. And then I was glad for the tapes, for they document the seeds of a brilliant body of work - a million songs wide and as many good ideas deep. She called herself The Fresh Young Breath, maybe still does. Though, given that she never performed, and barely ever shared her work, a name was unnecessary.

There’s something of the disconcerting otherwoldliness of The Fresh Young Breath in the work of Metallic Falcons, something of the trudge and swamp and loneliness. "Airships" is isolation made musically manifest. "Come with me," the singer beckons, "where rainbows die." And she invites us to other liminal places, too, and paints them with the distorted, falling-apart notes of an electric guitar. How have we come to hear this, I wonder? This impossible summons. It calls to mind a girl singing tantalizing thoughts into a recording machine, the fruit of which will never reach our ears.

I'm the dreaded casual Dylan fan. You know, the type that owns Dylan's Greatest Hits (because you have to) and Nashville Skyline (because it's the one time Dylan doesn't sound much like Dylan). I've yet to see [I’m Not There], but the soundtrack is an interesting tribute to the man.

Live At The Village Vanguard Again is the stub of a (lost) longer recording of a 1966 show featuring Trane, Pharoah Sanders on tenor and flute, Alice Coltrane on piano, and Jimmy Garrison and Elvin Jones on bass and drums as usual. Oh, and Emanuel Rahim on percussion, too. What fascinates me about these late Coltrane live recordings is the raw emotion, and this record is no exception.

Without a doubt the main attraction here is the contrasting styles of Trane and Sanders, best seen on "Naima." To Trane, this has always been a lush ballad, expressing the deep gratitude he felt towards his ex-wife, the woman that he credited with saving him from drug addiction in the late 1950s. So he plays his heart out - I never fail to be moved by the way he plays this piece. Sanders had no such concerns though, and takes the piece somewhere much darker during his extended solo. Reflecting perhaps the darker side of Trane's emotional state in those late days, Sanders sounds almost to be in tears, his tenor audibly wailing.

It is hard to believe that Christmas is merely three weeks away, even if the commercialized aspect of the holidays have been in full gear for over two weeks now. Along with the shortcoming imminence of Christmas comes the rush of holiday songs that accompany it, new and old. Whether you enjoy sipping a cup of hot chocolate while listening to the suaveness of Frank Sinatra's version of "White Christmas," decorating the tree to the optimistic delivery of Mogwai's twinkling "Christmas Song," or nodding your head to the catchy half-spoken-word anecdote in The Walkmen's "Christmas Party," the diverse array of styles within these "holiday songs" provides for an experience that never gets old (unless you play it out of season, of course). Even so, though all three songs above are reflective of the Christmas in style and substance, it is generally well-accepted that indie-rock songs usually do not fall in the category of stylistic clichés for the holiday season. In fact, if it were not for the lyrical content in the majority of them, they would not even be considered Christmas songs.