Why Iraq is Viet Not & Not Viet Nam 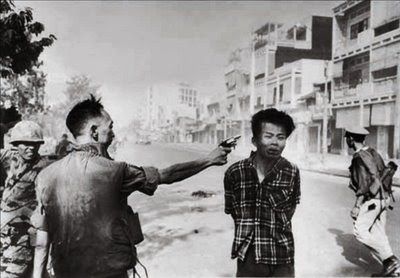 The analogizing between the wars in Vietnam and Iraq commenced as the glow from the speedy takedown of Saddam Hussein wore off and it became obvious that not only would U.S. troops not be home by Christmas 2003 but the Bush administration was ill prepared for a long haul that had the earmarks of becoming a Vietnam-like quagmire.

As I wrote here, there are apt comparisons between all wars. People are killed. People are taken prisoner. There are winners. There are losers. And sooner or later, Hollywood gets into the act and profits from the bloodshed. But the accurate analogies between Vietnam and Iraq are relatively few.

Now come scholar-historians Steven Simon and Jonathan Stevenson, who in a compelling Democracy: A Journal of Ideas commentary not only put the lie to much of the endless Vietnam-Iraq analogizing by the White House and senior U.S. military commanders, but argue that the biggest lesson of the earlier war is that the U.S. has to get out of the present one now.

Some highlights of the commentary:

* The decline of American prestige and destabilization of as a result of the misadventure resulted not from withdrawing too soon but too late. The Vietnam War had evolved from a guerrilla insurgency into a major conventional conflict, while the Iraq War "has taken just the opposite course."

Success in would have been defined by the withdrawing from a democratic "governed by a friendly elite respected by its people, overseeing institutions capable of defending the country against both external attacks and internal insurgents."

As the war proceeded, it became clear that there were no plausible circumstances under which the could win. "In taking up a stiff counterinsurgency challenge in , the made itself hostage to the effectiveness and commitment of the South Vietnamese government. . . . military gains could not be sustained."

Meanwhile, the lost support for the war at home not because the American people were spineless, as President Bush and his cheerleaders suggest, but "because they were convinced that the American leaders had conducted the war so incompetently and dishonestly for so long that victory could no longer be retrieved."

* offers important lessons for withdrawing from in part because there were several opportunities to do so well before 1975.

The first was between late 1963 and early 1965 "when doubts about Vietnam’s importance to U.S. and Western security, the ability of the Saigon government to do its part, and the U.S. military’s counterinsurgency capabilities were rife among American decision makers." The fear of appearing weak prevailed.

The next was from 1965 to 1967 when there were peace initiatives, "but mutual rigidity as to ’s future status and continuing majority domestic support for the war deprived them of critical momentum."

The last was from 1968 to 1969 "after 's resolve had been vividly demonstrated by the Tết Offensive and as domestic support decisively began to erode."

* The arguments for staying in are fundamentally flawed because of assumptions about what would happen if the leaves.

The 's regional adversaries "do not have a great-power patron comparable to the or " as was the case in . Furthermore, North and were, by and large, ethnically and religiously homogeneous. " is fiercely heterogeneous, both religiously and ethnically, and it is in the midst of a civil war between Sunnis and Shia. Beyond that, while the civil imperative in was to maintain the status quo, in it is considerably more difficult: to complete regime change from autocracy to democracy."

These realities suggest that in the event of a withdrawal, outside powers – including and Al Qaeda -- will lack the political or military means to control events inside . "Whereas communists readily took power in , jihadists will not take power in

* As long as troops remain in , American efforts are bound to have a one-step-forward-two-steps-back quality. To capitalize on the military gains that the Surge has produced, the Iraqi military, abetted by the central government, would have to consolidate those gains.

However, neither "appears capable of doing its part, just as neither ARVN nor the government was able to do theirs during the Vietnam War. . . . [T]he Bush Administration thus commits the same error that the Johnson and Nixon administrations did with respect to : emphasizing that we are winning on points while suppressing the likelihood that the resiliency of the insurgency, Iraqi military inadequacy, and Iraqi political dysfunction will eventually combine to inflict a knockout punch."

* The U.S. cannot abandon or ostracize , as it eventually did in , but this does not mean that any form of withdrawal will have terrible consequences.

"The Vietnam experience counsels not staying put but rather minimizing the U.S. military presence soon, while still promoting political progress in Iraq and regional stability. No cost-free solution exists; any 'victory' would achieve far less than what was originally envisioned by the war’s architects and strongest defenders. But a strategic withdrawal would constitute a mature response to what has become an obviously futile quest."

* Analogies to other counterinsurgency efforts also are inapt. These include and .

In in the 1960s, the British managed political and economic factors well and faced only a minority of an ethnic minority, most of which did not actively oppose them. There were a relatively small number of Salvadoran insurgents in the 1980s, no sectarian dimension to the conflict and fewer than 100 American military advisors were required. In , the British government and the pro-British Northern Irish majority were able to tame the Irish Republican Army sufficiently to open it to a political deal.

ABOUT THE PHOTOGRAPH
Taken by the late great Eddie Adams during the 1968 Tết offensive, this photograph is considered to be one of the two most famous images of the Vietnam War. Nguyen Ngoc Loan, South Vietnam's national police chief, wanted to make an example of a prisoner who was said to be a Viet Cong captain. Adams, an Associated Press photographer, won a Pulitzer Prize for the photo, which helped turn U.S. public opinion against the war.
Posted by Shaun Mullen at 5:49 AM
Email ThisBlogThis!Share to TwitterShare to FacebookShare to Pinterest