The Serial Failures of American Diplomacy 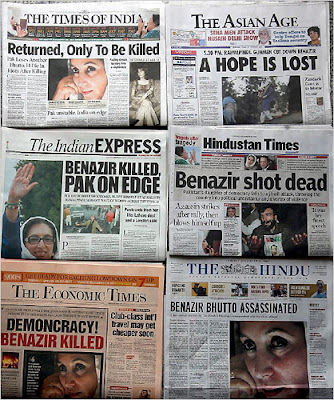 Having given President Bush a kick in the chops yesterday for being complicitous in the Benazir Bhutto assassination because of how he has coddled his favorite dictator and her implacable enemy, let's take a half a step back and address one of the administration's serial failures – its chronic inability to use diplomacy to advance America's interests abroad.

The White House has been at sea when it comes to talking to friends and foes alike and has drearily resorted to threats of using the stick over the carrot time and again, its embarrassingly ineffectual policy being a signal example.

Or, in the case of Pakistani President Pervez Musharraf, it has dithered while pouring tens of billions of dollars down a rat hole that has become a safe haven for terrorists while claiming that great strides are being made in heartland of the Global War on Terror.

The White House's stroking of Musharraf aside, there isn't a whole lot it could have done short of invading (not an option) or walking away and making a bad situation even worse (also not an option).

Which in fairness to the Bush administration points up the difficulties that the U.S. has faced all the way back to the administration of President Teddy "Speak Softly and Carry a Big Stick" Roosevelt in balancing its interests – benign or too often otherwise -- with nations whose way of seeing things don't coincide with Washington's.

That noted, the Bush administration's hard-wired default to bellicosity, the preferred means of the thuggish Dick Cheney, paired with it being the only global superpower of the moment, has exacerbated those historic difficulties. As has being played the fool by Nouri Al-Maliki in Iraq and Musharraf in Pakistan, two leaders who know that the U.S. needs them more than they need the U.S. in an era where presidential politics reliably trumps national policy.

With the exception of , the has precious little to show by way of diplomacy over the last seven years, and it has not helped that the un-Cheney -- Condoleezza Rice -- is a resume without a woman and the most ineffectual secretary of state in recent memory.

Beyond its blowhard approach toward Tehran, which took an embarrassing turn earlier this month when it was revealed that Iran apparently had shuttered its nuclear weapons program four years ago, there has been no bigger diplomatic failure on Bush's watch than his quest to bring democracy to the Muslim world while forcing out the militants who are the gasoline of the jihad against the West.

An upshot of which is that in the wake of Bhutto's death the U.S. is now forced to reach out to allies of former Pakistani Prime Minister Nawaz Sharif who have close ties to the very militants that Islamabad and Washington have been so ineffectual in marginalizing. Ironically, that may turn out to be not a bad thing as unaccustomed as the is to entering into dialogue with its foes.

The Bush administration (including Rice) get props for trying to broker a power sharing agreement between Musharraf and Bhutto.

But with its regional and world standing at low ebb and Musharraf more interested into holding onto power than sharing it, the deal was stillborn from the moment the opposition leader returned home to face a series of assassination attempts that in retrospect inevitably would lead to her death. No matter who actually pulled the trigger (my supposition is militants aided by Musharraf's military), the Pakistani president bears responsibility for her death and, as I noted yesterday, Bush's hands are anything but clean.

Juan Cole sums up the sitch thusly at Salon:

"'s future is now murky, and to the extent that this nation of 160 million buttresses the eastern flank of American security in the greater Middle East, its fate is profoundly intertwined with 's own. . . . If Pakistani politics finds its footing, if a successor to Benazir Bhutto is elected in short order by the PPP and the party can remain united, and if elections are held soon, the crisis could pass. If there is substantial and ongoing turmoil, however, Muslim radicals will certainly take advantage of it."

To get through the crisis, Cole says, Bush must insist that the Pakistani Supreme Court be reinstated by Musharraf, the PPP must be allowed to elect a successor to Bhutto without the interference of the military, early elections must be held, and the country must return to civilian rule.

Scarecrow at Firedoglake lowers the hammer, asserting that the Bush administration convinced Bhutto to return to Pakistan "to save a risky policy foolishly built on a despised, repressive military dictator."

" policy is in tatters. The administration was relying on Benazir Bhutto's participation in elections to legitimate Musharraf's continued power as president. Now Musharraf is finished," says Barnett R. Rubin of .

Maybe so or maybe not.

But it will take a newfound appreciation of the powers of patient diplomacy to begin to salvage the mess that an administration, more or less led by a president so deficient in the qualities of leadership, has made of its policy. A good start would be to lock the vice president in a closet and throw away the key.

if they used oil to run the internet you would be guilty of wasting natural resources and polluting the air.