The Law of Unintended Consequences & The Great Mike Huckaboom Freak-Out 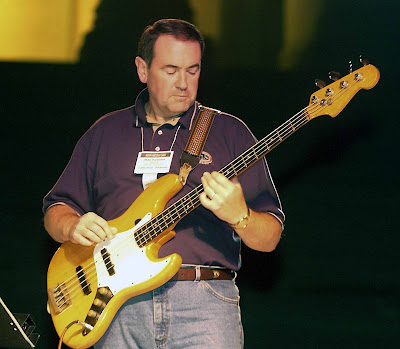 The Law of Unintended Consequences has been getting a vigorous workout in this campaign season. I’m just not talking about Hillary Clinton's Straight Smear Express, which ends up having to apologize every time it tries to run Barack Obama off the road. Or the fact that Rudy Giuliani's poll numbers are sinking faster than a mob victim wearing concrete shoes as voters find out what's behind that snarky smile.

No, the really big story is that after years of determinedly tearing down the GOP Big Tent in an effort to pander to evangelical Christians, Mike Huckabee threatens to break out of the pack with the first primaries and caucuses less than a month away.

The result is widespread panic among the ranks of Republican regulars.

But as Rod Dreher notes at CrunchyCon, this panic is not because Huckabee is an ideal candidate for the folks whom the regulars invited to hijack their party. Of course he is. They're freaked because he would be the dream candidate for another group with some say about who the next president might be -- the Democrats.

Rick Moran, opining at Pajamas Media, believes an upshot of the Huckaboom will be a great conservative crack-up that has been long in the offing because (get this) he is viewed as a George Bush clone in that he would be a big-government conservative.

Huckabee supporters complain that folks like myself are making too big a deal over his Christian bona fides, but the guy certainly isn't running on his experience as a mediocre governor beholden to special interests who comes off sounding like Barney Fife when he talks about law and order and Billy Graham when the subject is foreign policy.

John Cole shed his conservative Republican hair shirt not too long ago because he was scratching himself to death. He writes at Balloon Juice that if party regulars try to derail the Huckaboom and flip the nomination to someone like Giuliani they'll just end up infuriating those evangelical benefactors.

What makes this application of the Law of Unintended Consequences so delicious is that we're in the midst of the first wide open Republican presidential race in forever. The biggest reason for this is that the party is badly splintered. The party is badly splintered because it sold its soul. And the guy who is threatening to turn the field on its collective ear says his early success is because God is on his side.

Posted by Shaun Mullen at 12:21 PM
Email ThisBlogThis!Share to TwitterShare to FacebookShare to Pinterest