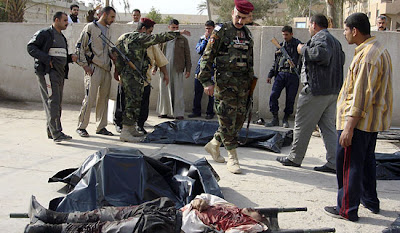 The reduced violence in in recent months stems from three significant developments, but the clock is running on all of them, Iraqi officials and analysts warn.

"It’s more a cease-fire than a peace," said Deputy Prime Minister Barham Salih, a Kurd, in words that were repeated by Qassim Daoud, a Shiite member of Parliament.

Officials attribute the relative calm to a huge increase in the number of Sunni Arab rebels who have turned their guns on jihadists instead of American troops; a six-month halt to military action by the militia of a top Shiite leader, Moktada al-Sadr; and the increased number of American troops on the streets here.

They stress that all of these changes can be reversed, and on relatively short notice. The Americans have already started to reduce troop levels and Mr. Sadr, who has only three months to go on his pledge, has issued increasingly bellicose pronouncements recently.

I saw a report from Iraq recently in which a military type explained how they'd brought solar-powered street lighting to a major town because it was a "no-brainer" given Iraq's large natural reserve of sunshine and the poor quality of the electrical grid. It saves generated power in barrel-loads, cuts oil dependency and it's also environmentally friendly. . . .

It's surely doubtful that there's some technical reason why what's done in Fallujah can't be done in . Is it just about utility company profits - more corporate welfare? Or is it that the no-brainers in charge haven't heard of this no-brainer idea yet?

Could George W. Bush be the Iranian Candidate? Like Mrs. Iselin in The Manchurian Candidate, who spouted anti-communist rhetoric while secretly working for their agenda in the , could Dubya really be an Iranian plant? Can you imagine anyone else who has done as much for than he has?

We should not be electing a theologian-in-chief. We need to elect a good president.

As a Christian, I also know that getting the answers right on a doctrinal test are no guarantee of a person’s moral disposition or fitness for leadership. Indeed, one’s orthodoxy can bear little relationship to one’s practice of faith. Experience, vision, compassion, good leadership, and an ability to govern well are the only tests upon which Christians—or other religious folks—should vote.

Of course, voters have the right to ask about candidates’ religious views, and politicians have the right to talk about those views. But when such rights verge on becoming a faith test, then we begin to sacrifice the wisdom of our political system in favor of a testimony that more rightly belongs in church. And a big part of that wisdom is that our president does not make theological affirmations that exclude millions of Americans on Inauguration Day.

MANHATTAN, Kansas — Nancy Boyda, a Democrat who ran for Congress in this district last year, owed her upset victory partly to the popularity of the Democratic woman at the top of the ticket: Kathleen Sebelius, who won the governor's seat. Now, with a tough re-election race at hand in 2008, Ms. Boyda faces the prospect that her electoral fate could be tied to another woman: Senator Hillary Rodham Clinton.

Mrs. Clinton is a long way from winning the Democratic presidential nomination, and over the last few weeks has struggled to hang on to the air of inevitability that she has been cultivating all year. But the possibility that she will be the nominee is already generating concern among some Democrats in Republican-leaning states and Congressional districts, who fear that sharing the ticket with her could subject them to attack as too liberal and out of step with the values of their constituents.

What do Rudy Giuliani's messy personal life, John McCain's temper and Hillary Clinton's inability to seem authentic have in common? Maybe nothing. They may be just overblown issues in the otherwise normal lives of candidates under the political microscope.

Such symptoms, however, may mean a lot -- such as evidence of underlying brain dysfunction. Sometimes people with messy personal lives have low prefrontal cortex activity associated with poor judgment; sometimes people with temper problems have brain damage and impulse control problems; sometimes people who struggle with authenticity have trouble really seeing things from someone else's perspective.

Is the brain health of a presidential candidate a fair topic in an election year? Certainly Dick Cheney's heart condition wasn't off-limits in 2000, nor have questions about McCain's age been considered out of bounds. The White House issues a complete medical history of the president each year -- detailing everything from his seasonal allergic rhinitis to his adenomatous colon polyps. Clearly we care about the health outlook for our elected leaders. Should we go so far as to do brain scans? Of candidates for the Oval Office? Some people might consider discussing brain health a ridiculous idea. Not me.

After a one-year hiatus -- and a whole lot of water under the bridge since then -- the World Bank is bringing back the office Christmas party.

Last year, bank leadership, under then-President Paul Wolfowitz, pulled the plug on holiday festivities, or at least strongly nudged divisions to do so, arguing that such revelry was inappropriate and wasteful at an organization devoted to fighting world poverty. Staffers were encouraged to volunteer or otherwise devote the money to good causes. Explained one bank source: "It wasn't Grinch-like." Still, many employees groused that the parties had been a rare chance to socialize with colleagues.

But Wolfowitz stepped down last spring after allegations that he engineered a hefty pay raise for girlfriend Shaha Riza. And now, signs of the season are reappearing at the bank, with most units starting to organize parties.