Oh That George Bush! He Was For The Troops Before He Was Against Them 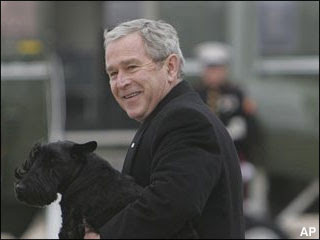 George Bush's misadventure in Iraq has had innumerable consequences, but what occurred on Friday evening while the rest of us were watching football bowl games may take the cake: Bowing to a corrupt Iraqi government that his administration keeps on life support, the president vetoed a sweeping defense authorization bill because it could expose the Baghdad government to billions of dollars in legal claims dating to Saddam Hussein's reign of terror.

Let's get this straight: Prime Minister Nouri Al-Maliki is now not only dictating to his former puppeteer in Washington as to what he can and cannot do, in this instance vetoing the president's own bill because it would expose Iraq to claims involving the man that provoked the Iraq war, but can suborn the needs of the military, as well as the will of Congress and the American people.

Shorter version: Iraq is not accountable to the U.S.

The provision to which the Iraqis objected would expand the ability of Americans to seek financial compensation from countries that supported or sponsored terrorist acts. They include , and under Saddam.

The administration was unable to explain why it had not acted earlier to object to the provision. Perhaps it's because Harriet Miers is no longer the president's legal counsel.

A deeply embarrassed White House promised that it will work quickly with Congress to restore the dozens of military and veterans provisions in the bill, which got overwhelming bipartisan support, once Congress returns to work in January. The new bill would not, of course, include the terrorist-act provision.

The provision was put into the bill by Senator Frank Lautenberg, the New Jersey Democrat, without public debate, a not unusual occurrance on Capitol Hill. It would help plaintiffs in lawsuits against and , including relatives of Americans killed in the bombing of the Marine barracks in in 1983 and in the bombing of a disco in 1986.

In a "statement of disapproval," or pocket veto that lets the bill expire on New Year’s Eve, Bush said the provision could result in injunctions freezing Iraqi assets in American banks - $20 billion to $30 billion, according to a senior administration official - and even affect commercial ventures with U.S. businesses. The horror!

"Only George Bush could be for supporting the troops before he was against it," said Senator John Kerry in a rephrasing of a familiar Republican attack during his unsuccessful presidential run in 2004 that he supported the war in Iraq before he turned against it.

And a perfect coda to yet another disastrous year in the Era of Bush.


Photograph by The Associated Press
Posted by Shaun Mullen at 11:28 AM
Email ThisBlogThis!Share to TwitterShare to FacebookShare to Pinterest