Scooter Libby: Gone But Not Forgotten 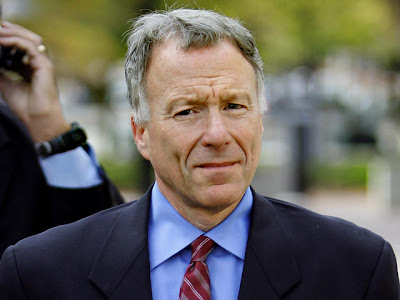 Once upon a time, when Iran supposedly still had a nuclear weapons program and there was a war in Iraq, there was a scandal involving Lewis "Scooter" Libby, the former vice presidential chief of staff whose conviction in March as a result of the Wilson-Plame affair was commuted by President Bush.

Those halcyon days may seem like so much ancient history, but not for Representative Henry "Mr. Investigation" Waxman, the dogged Democrat from , who is still trying to pry loose Special Counsel Patrick Fitzgerald's FBI files on the case.

Waxman wants the potentially explosive files for an ongoing Oversight and Government Reform investigation because they include information that Fitzgerald did not present to the grand jury -- and therefore is not subject to secrecy laws -- that subsequently indicted Libby on obstruction of justice and perjury charges.

In July, the president turned down Waxman, but he has now asked newly-minted Attorney General Michael Mukasey to light a fire under the White House.

Fitzgerald, according to Waxman, has been cooperative and forwarded to his committee CIA and State Department files, but he cannot release White House-related files on his own.

The upshot of the Mukasey overture is likely to be more stonewalling because Waxman wants the transcripts, notes and other documents relating to Patrick's interviews with the president, Vice President Cheney, former Chief of Staff Andrew Card, National Security Advisor Stephen Hadley and Deputy Chief of Staff Karl Rove.

I agree with blogger Empty Wheel, late of , that the focus of Waxman's continuing investigation is how it was that Valerie Plame Wilson's identity as a covert CIA operative was leaked but there was no investigation or removal of security clearances for the blabbers, who include Rove, among others.

The answer, of course, is beyond obvious: The White House had no interest in doing anything, let alone play by the rules, once its primary objective was attained – striking back at Joseph Wilson for revealing that one of the principal rationales for the war was false and then ruining his wife’s career for good measure.

Bush administration apologists will continue to argue that Plame really wasn't a covert operative, Patrick overstepped his bounds, Libby was framed and Bush's commutation of Libby's 30-month prison sentence was appropriate. They're right about the commutation insofar as it was within the president's purview, while the other claims are demonstrably false.

So if this is ancient history, why should Waxman be wasting his time and our money on it? Because unlike land deals and Oval Office blow jobs, national security was severely compromised and the truth must out.