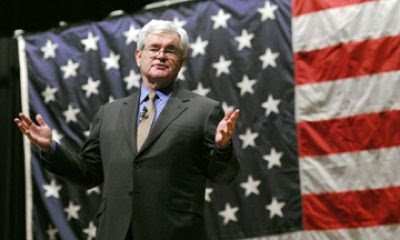 Norman Podhoretz, John Bolton and Newt Gingrich are leading the charge in asserting that the National Intelligence Estimate that concludes dismantled its nuclear weapons program in 2003 is misleading and damaging to the national interest. The report sure was a shocker, but do these most serious charges hold water?

Neocon pilgrim and Rudy Giuliani foreign policy advisor Podhoretz and former U.N. ambassador Bolton are horse's backsides of the first water, so we'll put their yammering aside. But Republican conservative political guru Gingrich, who is nobody’s fool but occasionally his own, is usually worth listening to.

This is what Gingrich had to say on ABC’s This Week about the report:

"What you have is a release which, first of all, could not have been written to be more damaging to the Bush administration than it was. And the three people who wrote it are all three former State Department employees . . . they’re all three people who dislike what Bush is doing. I think they deliberately undermined the administration. I think this is the equivalent of a coup d'etat by the bureaucracy. If you actually read what they said . . . even the unclassified version doesn’t say what the front, what the headline said. The unclassified version says that there's a big civilian program, they have at least 3,000 centrifuges already working -- and 3,000's enough to produce one bomb a year. They have a clear commitment to get nuclear weapons; there’s no evidence they’re going to give up that commitment. What the report technically said was that there was one particular program that was secret that we were certain was ongoing, we've now had a defector, that's my guess, and the defector's told them this, and my question is: How do we know that defector's not a plant?"

Let’s break down these thoughts point by point:

* The estimate could not have been more damaging to the Bush administration and was intentionally so.

It is difficult to believe that there has not been more squawking, including the usual well-placed leaks from inside the White House, if this charge had real merit. Besides which, it's yet another example of conservatives staking out a policy position and then automatically disagreeing with, ignoring or hiding anything that goes against that policy, which has been a signature of the Bush administration.

* still has a big civilian nuclear program capable of producing a bomb a year.

No argument here. But we are led to believe by administration insiders that release of the NIE was held up because skeptics insisted that fresh evidence that the weapons program had indeed been dismantled -- if not merely put on hold – be obtained. It was and confirmed the original assessment.

* How do we know that Gingrich's alleged defector is not a plant?

We certainly don't know that. But it beggars belief that an estimate based on the work of the CIA, DIA, FBI and NSA, among other agencies known for their independence and readiness to fight turf battles, came down to the say of one defector/plant and not the unanimous judgment of all those agencies based on multiple sources.

In the end, Gingrich blurred the lines between intelligence analysis and policy making.

The NIE contains no policy recommendations. It is the responsibility of the intelligence community to analyze its best information on what was up to. It appears to have done so, although no one should be breathing a sigh of relief given that the mullahcracy could restart the program and may already have done so. (In fact, one poll shows that few Americans believe the report.)

It is the responsibility of the White House and several Cabinet-level agencies to formulate an Iran policy. That policy has been based on bellicosity and not diplomacy, for the most part, so the NIE set off its own chain reaction among bomb 'em conservatives like Gingrich.

Gingrich also is royally pissed that the NIE was made public in the first place.

It is beyond me why a summary so vitally important to the national interest -- a summary that compromised partisan political rhetoric but not national security -- should be kept secret if not merely in the service of secrecy for its own sake.

The Newtster's anger is understandable if misplaced. In one fell swoop, the major foreign policy initiative of the last year of the Bush administration and a rare opportunity for the president to try to salvage his tattered legacy has been undercut.

And perhaps most painfully of all, the nuanced approach that European nations have taken toward a thorny foreign-policy challenge -- as opposed to threatening to bomb first and ask questions later -- seems to have been validated.

THE BA-BA-BACK STORIES
Almost as interesting as the main events itself are some of the back stories on last week's blockbusters -- the NIE report and the destruction of the CIA torture tapes:

* On the NIE report, that the spooks are revolting.

Under this scenario, senior intelligence officials were prepared to go to jail if the NIE summary was not made public. Soorry, I'm not buying.

* On the NIE report, that it largely was a result of a program called "Brain Drain."

Interesting if true. This was a major push ordered by the White House two years ago that sought to persuade Iranian defections (such as Gingrich's defector/plant?) from its nuclear program. Irony of ironies, Bush had earlier dismantled an Iran Task Force set up during the Clinton administration in order to focus all his attention on . . . Iraq.

* On the CIA tapes, that it's all the Republicans' fault.

Again, I'm not buying. With the limited exception of Democratic Representative Jane Harman, who in a self-censored letter told the CIA of her displeasure with waterboarding in 2003, the Democratic leadership is as complicitous as its Republican peers.

* On the CIA tapes, that the Democratic leadership is split about how to proceed.

Foreign Relations Committee chairman Joe Biden wants a special counsel appointed while Intelligence Committee chairman Jay Rockefeller wants a congressional investigation. Perhaps not coincidentally, Rockefeller was one of the lawmakers brief by the CIA on the interrogation program who only found his voice when the tapes scandal broke.
Posted by Shaun Mullen at 5:39 AM
Email ThisBlogThis!Share to TwitterShare to FacebookShare to Pinterest

And what do you think of Obadiah Shoher's arguments against the peace process ( samsonblinded.org/blog/we-need-a-respite-from-peace.htm )?