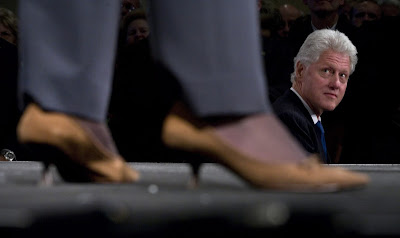 The Hillary Rodham Clinton campaign's attempt to make Barack Obama’s self-admitted high school drug use an issue is a defining moment: That is the reality that Mrs. Clinton not only has the steely resolve to be president, but is so calculatedly vicious that the prospect of her wielding the vast powers that come with the Oval Office is truly frightening.

I have made no secret of my dislike for Mrs. Clinton although my politics are usually left of center and I certainly have looked forward to the end of the Republican presidential interregnum. I will hold my nose and vote for her if the Republican nominee is even less acceptable.

As the race heats up, the quantity of mud being slung will increase in direct proportion to the desperation of the candidates who find themselves falling behind too much or not gaining enough. That is a given, and it is obvious that the woman who has been running like an incumbent and whom the mainstream media had all but crowned as the nominee is hearing Obama’s footsteps.

Mrs. Clinton did not bring up Obama's use of cocaine and marijuana as a teenager, which he has written and spoken about with refreshing candor. The spear chucker was Billy Shaheen, her campaign manager, the husband of Governor Jean Shaheen and a likely candidate for the Senate next year.

Billy Shaheen disingenuously cloaked the drug "issue" in terms of candidates' electability. He whined that Obama is far less experienced than Christopher Dodd or Joe Biden, yet is a frontrunner unlike those veteran pols.

He predicted that Republicans surely would seize on the "issue."

"It’ll be, 'When was the last time? Did you ever give drugs to anyone? Did you sell them to anyone?' " Shaheen said. "There are so many openings for Republican dirty tricks. It’s hard to overcome."

The line about selling drugs is especially vile since, to the best of my recollection, no one has asked any white politicians who have acknowledged drug use whether they sold what they were smoking or snorting.

Don't give me any stuff about Shaheen's remarks being unauthorized; the man is constantly at 's side when she campaigns in and is well aware of how far over the line he is allowed to go.

Shaheen should have fired himself, or Mrs. Clinton could have shown him the door when she apologized. That would have been a nifty way of assuring Democrats -- especially the many Democrats who have negative views of her -- that her campaign will not take a page from the Bush playbook and use the politics of fear and character assassination.

But he didn't and she didn't. (UPDATE: Shaheen has now resigned from the campaign.)

Comparing what Mrs. Clinton says and does to what her husband said and did does not typically play with this voter. But it should be noted that Bill Clinton never made a clean breast of his serial philandering, which nearly destroyed his presidency, or his own recreational drug use. He says he didn't inhale; Obama wryly notes that of course he himself inhaled, that's why you smoke pot, right?

Will this abomination blow up in Mrs. Clinton's face? I certainly hope so, especially as it applies to black voters who may be on the fence, but it's too soon to tell. Besides which, in another few days the holidays will be upon us and few people will be listening to anything the candidates are saying, let alone the offal emanating from the Clinton campaign with increasing regularity.

Posted by Shaun Mullen at 12:00 PM
Email ThisBlogThis!Share to TwitterShare to FacebookShare to Pinterest

Thanks for this post. I tried for so long to be in Mrs. Clinton's corner, mostly because I thought she was strong and a straight-shooter and concerned about social welfare. And, being really honest, I wanted Bill back in office.

But she's not what I thought and I just can't do it. Honestly, I expect to see her on stage at the Republican debates - she's not the upstanding person I thought, she's exceptionally conservative, and she's way too hawkish. I'm very afraid people will vote for her hoping that it will be a Bill Clinton White House again. It won't be anything close.

And now she's proving to be as low or lower as many others on the campaign trail.

All I can think of regarding every single canditate, on both sides, is "Is this all we can come up with"? It's not an uplifting picture.

The Clintons do not play around and politics is a dirty, dirty business. It's even dirtier on the international level. I like Obama, but he is no match for some of the bad actors he will have to contend with. I'm hoping Hillary tries every trick in the book. If he can meet and match her arsenal, then he deserves to be President, but I don't think I'd like to see him get there on Oprah's coattails. I want to see him fight for it. Charm and eloquence are nice, but not enough. I liked Carter too, but I think he was a bad president.

Who on the R side would you find acceptable? The only one I could ever vote for would be John McCain. Rudy is tough enough for the job, but he's really a creep. The rest are snoozers or nuts. The things that Huckabee says are embarrassing. His fiscal responsibility is questionable. Really, it's a sorry field. Romney did all right in Mass, but I really disliked his willingness to discard the secular nature of govt.