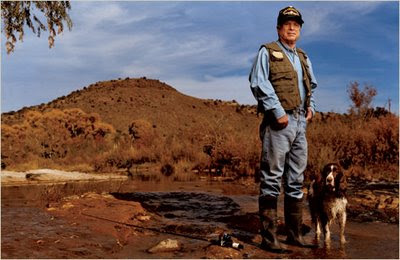 JOHN McCAIN AND SAM AT HIS ARIZONA RANCH

The most electable candidate remains broadly unpopular within his own party.

That would be John McCain, who's still breathing after having been given up for dead not too many months ago. I'm tempted to wonder whether Republicans are so fixated on punishing illegal immigrants that they would prefer to lose the '08 election rather than nominate an electable guy whose talk of compassion flunks their litmus test. . . .

McCain is left with the task of wooing the party base, but the immigration issue apparently remains a deal-breaker. He gets no points for being consistent in his belief that illegals can't simply be shipped home ("these are God's children as well, and they need some protections under the law and they some of our love and compassion"), nor for his willingness to state his belief in front of hostile Republican audiences. For many grassroots Republicans, hostility towards illegal immigrants has replaced hostility towards abortion providers as the ultimate litmus test.

But maybe McCain is providing Republicans with the ultimate test - between pragmatism and purity. What's more important next year: Is it better to punish McCain on this issue, and risk not fielding the most electable candidate?

As Voltaire warned a few centuries ago, "The perfect is the enemy of the good."

-- DICK POLMAN
More than any other question, Republican presidential candidates are asking voters to consider a single issue in the weeks before primary voting begins: Who detests illegal immigration the most?

-- PETER WALLSTEN and SEEMA MEHTA
I've written before that in both politics and romance, desperation does not act as an aphrodisiac. The Hillary Clinton campaign has gone past the stench of desperation to the reek of flop sweat as they see their inevitability collapse into incoherence. Hillary's New Hampshire co-chair warns that surging Barack Obama will get peppered with questions about his admitted high-school drug use.

National Review's endorsement of Mitt Romney is somewhat fascinating. Pretty much everyone agrees that from the point of view of orthodox conservatism, the current GOP field is a bit of a problem. Since someone has to win, I can imagine plausibly arguing that, all things considered, Romney should be the first choice of National Review readers. But the magazine seems determined to just deny that there's any problem.

Mitt Romney’s speech and the emergence of the anti-Darwin Baptist minister Mike Huckabee suggest how estranged the American zeitgeist is from the European.

The 40% of Iowans who self identify as Christian conservatives evidently don’t get out much. Either that, or they’ve simply decided to take an early Christmas holiday from reality. Otherwise, I can’t understand why so many would have fallen so completely for the flim flam being perpetrated by the least knowledgeable, least prepared, and most backward thinking of all the Republican candidates in the field -and that includes candidates going back to the 1950’s.

I am talking about the walking, talking disaster-in-the-making that is Mike Huckabee – former governor of a small, impoverished state, a Baptist preacher whose conservative views on social issues make him a perfect candidate for the Leave it to Beaver wing of the GOP, and a man whose thinking is so shallow a warning sign should be plastered on his forehead reading “Absolutely no diving beyond this point.”