The Ft. Dix Six: Of Pizzas and Terror Plots 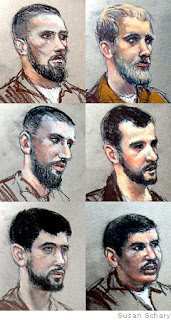 How seriously should the FBI take a bunch of hard-drinking wannabe blue-collar terrorists who ask cops for maps of military installations, have trouble finding lethal weapons, practice jihadist attacks by playing paintball in the Pocono Mountains, go to a Kinko's to have a videotape made of their training sessions made into a DVD, are infiltrated by not one but two informants and include a brainiac who knows their eventual target, a wide-open Army base in their own back yard, "like the back of his hand" because he once delivered pizzas there for his family's restaurant?

Having noted that, it appears that the arrest of six Philadelphia area men identified as Islamic radicals who were planning to attack soldiers at , with rifles (of which they had a few) and a rocket launcher (no gots) probably will not go down as one of the great saves in the War on Terror.

In fact, these clowns appear to have more in common with the nimrods from who were going to take a bus to and blow up the .

Having noted that, I repeat that the FBI was right to go after the Ft. Dix Six. To me, what matters almost as much is how the arrests were presented by the government to a public alternately apathetic and numb about homeland security in large part because of politically driven changes in terror threat levels. You know, those color thingies.

The Justice Department made a collective fool of itself in the Miami case because it pulled out all of the public-relations stops and equated those suspects with the foulest of the al Qaeda foul. That was plain silly.

This time the response was more measured.

Christopher Christie, the U.S. Attorney for New Jersey, took pains to say that the men were not linked to any international organization, although he did make what seemed to be a gratutitously irrelevant reference to Virginia Tech killer Seung-Hui Cho in saying that the men had the same potential for destruction.

But the lack of any terror ties was not a big relief because the conspirators, as amateurish and bumbling as they seemed to be, represent a new brand of free lancers who are inspired by Al Qaeda and other groups even if they are not part of them.

"Terror attacks are not always going to be on the scale of 9/11," Christie said. "This is the model for the post Sept. 11 era."

"What we are witnessing here is kind of a brand new form of terrorism," said J.P. "Jody" Weis, the special agent in charge of the FBI's Philadelphia field office. "They operate under the radar . . . they strike when they feel it is right whenever that might be."

Three of the men are ethnic Albanian brothers who owned a roofing business and were in the country illegally. The others include natives of Jordan, Turkey and the former Yugoslavia who were legal residents.

Court papers documented a series of conversations recorded by the federal informants as the six men reconnoitered targets. They eventually settled on Ft. Dix because there was less security there than high-profile targets like Dover Air Force Base in Delaware. In fact, Ft. Dix is a virtually wide open installation that includes a small low-security federal prison, among other facilities with relatively easy public access.

"In the end, when it comes to defending your religion, when someone attacks your religion, your way of life, you go jihad," Eljvir Duka, one of the conspirators, allegedly told one informant. "My intent is to hit a heavy concentration of soldiers. "This is going to be easier to hit specially if you have eight or nine shooting with machine guns and they are good shooters."

In April, one of the informants arranged a gun buy, and on Monday night FBI agents posing as the seller showed up at the brothers' home with an inoperable AK-47. The deal was consummated and arrests were made.


Sketches by Susan Schary/New York Daily News
Posted by Shaun Mullen at 6:22 AM
Email ThisBlogThis!Share to TwitterShare to FacebookShare to Pinterest