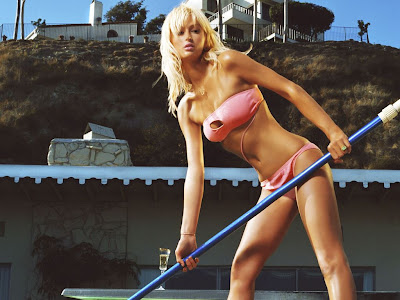 Time to tighten the belt, .

Hotel magnate Barron Hilton announced yesterday that he's leaving 97% of his wealth to charity, dramatically cutting the fortune his children and grandkids will get.

That means granddaughter Paris Hilton, who once stood to inherit $100 million or more by some accounts, could end up with a measly $5 million or so.

"The whole family will be devastated, particularly [' mom] Kathy," a pal of the clan told the Daily News last night. . . .

Barron Hilton is worth an estimated $2.3 billion, including the $1.2 billion he made from the sale of the Hilton Hotels and Harrah's casino chains.

All but 3% of the money will go into a charitable trust to benefit the Conrad N. Hilton Foundation, which was started by his father.

The foundation funds clean water in , education for blind children and housing for the mentally ill.

There have been conflicting reports about the socialite's relationship with the 80-year-old.

Author Jerry Oppenheimer has said Barron Hilton is so embarrassed by ' antics - from her sex tape to her drunken-driving bust - that he cut her out of his will.

But other sources have reported that the businessman was so impressed by her money-making abilities that he forked over a big chunk of her inheritance last year.

As inured as we may be to the flow of bloody news from that part of the world, the death of Benazir Bhutto comes as a shocking reminder of how deeply involved we now are in places where murder is part of the political process.

When a mayor of leaves office, little goes out the door but memories — unless he’s Rudy Giuliani. Government rules discourage the city’s most powerful officeholder from departing with more than token gifts collected on the job.

Ed Koch, mayor from 1978 to 1989, recalls keeping some neckties. His successor, David Dinkins, walked away with knickknacks from his desk, including a crystal tennis ball and a collection of photographs documenting his meetings with celebrities and business icons.

When Giuliani stepped down, he needed a warehouse. Under an unprecedented agreement that didn’t become public until after he left office, Giuliani secreted out of City Hall the written, photographic and electronic record of his eight years in office — more than 2,000 boxes.

One of the more annoying qualities of the Bush White House’s policy on stem-cell research the last several years is its incoherence. It’s not just that the president has blocked potentially life-saving medical research, it’s that his rationale for doing so ends up contradicting itself.

As Bush sees it, embryos are human life, and should therefore not be subjected to medical testing. The White House, at one point last year, went so far as to argue that it’s literally "murder" to conduct research on these embryos.

When the clock runs out on 2007, Boston will quietly mark the end of one of the most tumultuous eras in the city’s history: The Big Dig, the nation’s most complex and costliest highway project, will officially come to an end. Don’t expect any champagne toasts. After a history marked by engineering triumphs, tunnels leaks, epic traffic jams, last year’s death of a motorist crushed by falling concrete panels and a price tag that soared from $2.6 billion to a staggering $14.8 billion, there’s little appetite for celebration.

-- THE ASSOCIATED PRESS
I now find myself, for the first time in my life, hating Jews. I find myself hating the Jews on this site, both the Jews who have conducted their malicious campaign against me for so long and the Jews who have stood by in silent solidarity with them, never saying a word against their vile attacks, their cruelty and ugliness.

I find myself thinking that Proximity perhaps has the right idea, that Jews regard other human beings as objects, to be sacrificed to the interests of Jews. That Jews will always stand with other Jews no matter their guilt, and against non-Jews, no matter their innocence. The face of Jews has become unspeakably ugly in my sight, because of the ugliness of the Jewish haters here.