A TV News Hen Runs Afowl of the Law 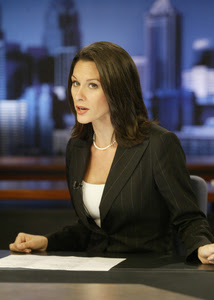 It has been way too long since I blogged on something as inconsequential as a television news anchor making the news instead of reading it. But the saga of Alycia Lane -- who allegedly punched a cop in the chops, which is against the law, and made an all around fool of herself, which isn't -- is too juicy to pass up.

Lane, who co-anchors the news at Philadelphia's CBS3 and CW Philly, was arrested early Sunday morning in New York City after she allegedly punched a female police officer in the face after yelling "I don't give a f--- who you are, I'm a f---ing TV reporter, you f---ing dyke."

Lane, who is 35, and her current squeeze, Philadelphia radio station Q102 morning host Chris Booker, and another couple were in a cab behind a slow-moving unmarked police car at 17th Street and 9th Avenue in lower Manhattan, the New York Post reported. One of the males jumped out and headed to the police vehicle, screaming, "I don't care if you're a cop, drive faster!" the newspaper said.

The officers got out and identified themselves to Lane and company, and Lane began to take photos, according to the paper. The female cop asked her to step back and that's when Lane allegedly lost it. She was then thrown to the ground by the officers and subdued.

Lane was charged with one count of assault with intent to cause physical injury to an officer and her iPhone was confiscated as evidence. No one else was charged. The officer suffered lacerations to her face. Lane was released on her own recognizance later in the day. No bail was set and a hearing was scheduled for April 3.

After being sprung, Lane showed that she is not just another pretty face and takes journalistic ethics very seriously:

She called Pennsylvania Governor Ed Rendell. As a gubernatorial mouthpiece later put it, this was to "make sure he knew her side of the story because he is an opinion maker and runs around in influential circles." (Cough, cough.)

Lane's lawyer, David Smith, defended his client, saying "Miss Lane never hit or ever said any derogatory comments to anyone."

Lane was "accosted by several individuals wearing plainclothes," Smith said. "They attempted to grab her camera to prevent her from taking photographs of an altercation they [the plainclothes officers] were involved in. Miss Lane was shocked to learn after the fact that these individuals were police officers."

In fact, Smith said, Lane "respects police officers and has done several positive profiles of them in the Philadelphia area."

While that last statement should cinch it for me, I'm a little skeptical of Lane's goodie two shoes-ness.

For all I know, Lane may be a top-notch journalist and not just another bird from that bottomless well of news hens who pretend to be journos. (Disclaimer: There are many damned fine women in the biz who don't have to pretend.)

But Lane comes off as being vapid and condescendingly sincere with that perfect TV anchor head tilt (see photo), a practiced seriousness and fixed gaze that goes right through my frontal lob into the back of my Barcalounger. So I watch the competition.

Lane is, as they say, no stranger to controversy.
She appeared twice on the Dr. Phil show to address her failed marriages, then made national headlines in May when the New York Post reported that she had e-mailed photos of herself in a bikini to married NFL Network anchor Rich Eisen. This apparently upset his wife, but Lane said she and Eisen had been platonic friends for 10 years.

Lane, who is paid $700,000 a year, has been removed from all station promos and edited out of a holiday special being broadcast tonight. And effective yesterday, she began a planned two-week, end-of-year vacation a week early.