An Update on N.C. Wyeth's 'The Apotheosis' 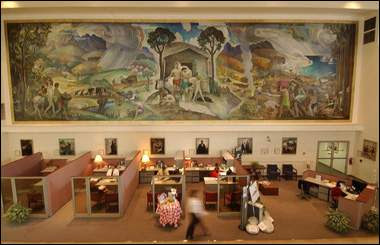 Back when I was a little sprat, I opened my very first savings account at the Wilmington Savings Fund Society office on in that northern city, a semi-bustling burg of 80,000 or so souls dominated by the mighty Du Pont Company.

She replied that it was N.C. Wyeth's "The Apotheosis of the Family."

Every time my deposit book filled up and I returned to WSFS, I would gaze up at "The Apotheosis," which had the effect of making me feel very small in stature but at the same time very big since I was old enough to have my money in 's premier savings bank.

Fast forward more years than I care to remember. Du Pont still has a presence in , but it is a considerably diminshed one as the once giant chemical maker has stumbled trying to branch out from its longtime moneymakers in synthetic fibers, paints and such into new markets like pharmaceuticals and genetic engineering. The city's skyline is now dominated by big out-of-town banks that have opened credit-card operations to take advantage of 's welcoming banking laws.

That is how I opened a post early this year. A decision has now been made on the fate of "The Apotheosis."

Check spelling. That should be Apotheosis, which is a whole 'nother thing.