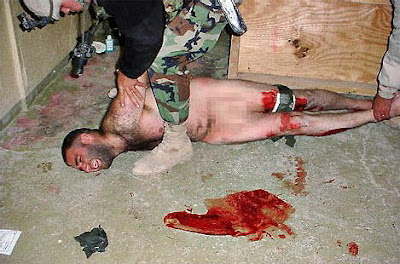 Remember when people used to do things based on principle?

Well, that hallowed but seemingly moribund concept has gotten a boost with the resignation of Lieutenant Commander Andrew Williams, a U.S. Naval Reserve lawyer, over the Bush administration's approval of the use of torture and the willful destruction of video tapes by the CIA that were said to show the torture of terrorism suspects.

Explaining his resignation in a letter to The Peninsula Gateway, a newspaper in , where he lives, Williams said what finally prompted him to resign was the congressional testimony of Army Brigadier General Thomas W. Hartmann, the legal advisor of the branch of the Rumsfeld Gulag, who refused to call the hypothetical waterboarding of an American pilot by the Iranian military torture.

"The final straw for me was listening to General Hartmann, the highest-ranking military lawyer in charge of the military commissions, testify that he refused to say that waterboarding captured U.S. soldiers by Iranian operatives would be torture.

"His testimony had just sold all the soldiers and sailors at risk of capture and subsequent torture down the river. Indeed, he would not rule out waterboarding as torture when done by the United States and indeed felt evidence obtained by such methods could be used in future trials.

"Thank you, General Hartmann, for finally admitting the is now part of a long tradition of torturers going back to the Inquisition."

And thank you Andrew Williams for standing up for what is supposed to be all about.

Posted by Shaun Mullen at 10:40 AM
Email ThisBlogThis!Share to TwitterShare to FacebookShare to Pinterest

Read this poem as a poetic prediction as to where this evango' phony amoral mercenary hiring administration was going to lead America.
It was written before Abu Ghraib and water boarding became verbal markers for the demise of America's positive self image.