Another Blow to Iraqi Reconciliation 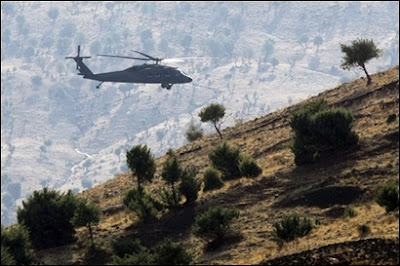 A TURKISH GUNSHIP NEAR IRAQI BORDER
The never ending road to reconciliation in is littered with many setbacks.

The U.S. bears responsibility for two of the worst -- the foolish de-Baathification of the Iraqi army, which has had awful consequences, and a civil war now temporarily on hold while various sectarian interests inimical to reconciliation consolidate power in the face of a largely toothless central government that is only good at corruption.

Now comes another setback in which the U.S. plays a role so twisted that it is difficult to sort out:

The Kurds in northern Iraq have been on board the reconciliation train from the time it first left the station.

But the Kurds have a nagging problem with the separatists at their backs who keep making cross-border forays into Turkey. is a usually reliable ally. Most of the materiel for the war is transshipped through .

Turkey has a really big problem with the separatists.

The U.S. denies giving even tacit approval for this major escalation of the Turkish-separatist conflict.

But the U.S. provided targeting intelligence for the airstrikes from a center in based on feeds from aircraft and drones.

Now the Kurds are furious with Washington for helping the Turks and with the central government for not intervening.

The government is furious with Washington because it was never asked for permission for its airspace to be entered.

Who can blame them?

Politics in this part of the word have always been complex.

But when the bigfooted in to topple the Saddam Hussein regime and then so thoroughly botched the post-invasion occupation, it set off a chain of unintended consequences, not the least of which are the serial obstacles to the reconciliation that would expedite troop withdrawals, that will reverberate through this latest mess and well into the future.

Across the board, Iraqis from all sectarian and ethnic groups believe that the invasion is the primary cause of the violent differences among them and see the departure of troops as the key to national reconciliation.