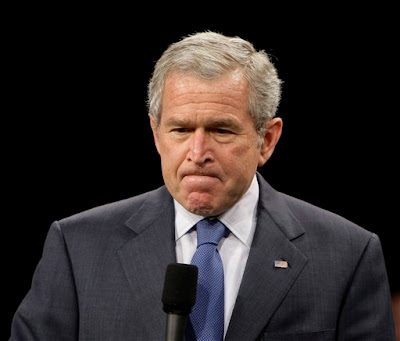 We have either a president who is too dishonest to restrain himself from invoking World War Three about Iran at least six weeks after he had to have known that the analogy would be fantastic, irresponsible hyperbole — or we have a president too transcendently stupid not to have asked — at what now appears to have been a series of opportunities to do so — whether the fairy tales he either created or was fed, were still even remotely plausible.

The Democratic disarray continues in Congress, where leadership has no clue how to manage expectations. Once again, after promising to force the White House into commitments on troop withdrawal deadlines, they have reversed course. Instead, they will set up benchmarks on political progress that will not force any withdrawal commitments at all.

According to a poll, the Republicans have lost all the support among Hispanics that they gained early in Bush's first term. . . . The Republicans weakness among Hispanic voters may cost them New Mexico, Florida, Colorado and Nevada in the 2008 election. If they don't repair the damage, it will cost them a lot more than that over the long term.

Only in can you be called an "environmental maverick" because you finally realize that global warming is real, and poses a serious threat to our future. But that's exactly how conservative John Warner, the Senior Republican Senator from is being described . . .

If the CIA didn’t have a history of stiffing Congressional Committees, judicial proceedings, and special tribunals like the Warren Commission, we might be more inclined to believe General Hayden. But it is ridiculous for Hayden to say that the decision to destroy [the tapes]was made in a political vacuum.

The Boy Scouts will be evicted from a municipal building for refusing to denounce the organization’s policy of prohibiting homosexuality.

After six years of policy based on religious beliefs, the fruits of "faith-based" sex ed are ripening. The latest statistics show teenage births rose 3% last year. The obvious conclusion is that abstinence-only sex ed is the culprit yet the abstinence-only nannies are claiming this is proof that teaching about safe sex is to blame, apparently because they haven't managed to completely wipe out the fact-based programs yet.

The National Baseball Hall of Fame has become a national joke. Its latest electoral contrivance elected three former executives to the Hall, none named Marvin Miller. Making the committee’s decision even worse, one of the three is named Bowie Kuhn.

The Pope's Prophylactics
.
I have this vision of acolytes preparing the Pope's food in the Vatican kitchens.
In this day and age they are appropriately wearing latex sheaths on their hands. Each finger is covered; ten little condoms for the Pope's oral hygiene.
But when it comes to genitalia..icky, icky...Pius and Paul...forswear protection in Christ's name...you'all.