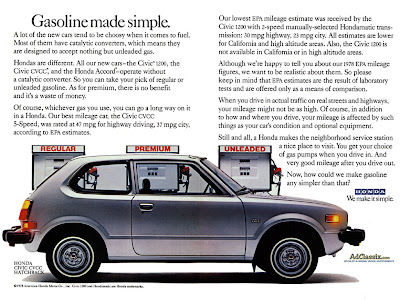 AD FOR THE 1978 HONDA CIVIC
Americans are overweight but so are their cars, which explains why the new fuel economy standards in the not-bad energy bill being applauded by President Bush and Congress mandate a measley 35 miles per gallon -- which is about what some of us were getting 20 and 30 years ago driving small economy cars.

While the new standards are 40 percent higher than today's, they're merely on par with cars like the 1978 Honda Civic, which got 35 miles to the gallon toodling around town and upwards of 50 miles to the gallon with a good tailwind on the interstate.

More here. And here for Governor Arnold Schwarzenegger's not happy reaction to the EPA's decision to bar California and other states from setting their own fuel emission standards.

And I'll sing an ode to public transport, which in a large city allows many of us to exist without vehicles. Here's to making buses and subways greener and greener.

I had a VW Rabbit built in Pennsylvania that took diesel fuel and got 50 plus miles per gallon.