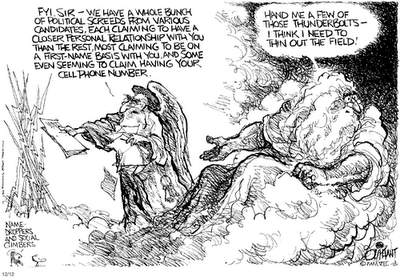 It is . . . all the more unfortunate that the issue of religious tolerance should arise in a morally and intellectually underwhelming debate between unworthy Christian evangelicals and an opportunistic Mormon politician. They are not worthy of it, but the debate is emphatically taking place. On the one hand, religion is a set of contestable cognitive propositions--not necessarily finally assessable, because of subjectivities--but still a matter of rationality, and beliefs that could, in principle, be accepted as right, or come to be seen as wrong and then changed. Changed within the religion--as with Mormonism and its earlier racial doctrines, for example, even if change requires appeal to such rhetorical devices as gradual reinterpretation of sacred texts and practices or even divine revelation rather than rational discourse. Or, if not within the religion, then changed in extreme cases from without by rational discourse resulting in regulation by the state--as with Mormons and polygamy. If this were all there were to religion, the arguments for outside rational revision of it--apart from prudence and civil war--would be considerable. . . .

Now consider Mitt Romney's speech and the answer he gave to the matter of religious tests. Leave aside the whining secularists who complain that Romney left no place for unbelievers in the Republic. Correct and not of unconcern by any means, but frankly far less important than the question of multiculturalism; and anyway, one may trust left secularists to look after their interests in such matters. No, the much more important matter was that Romney announced what might be called, appallingly, "conservative multiculturalism"--indeed, a form of conservative moral relativism. If the demand of the evangelicals was all‑in, then his answer was all-out. . . .

The exchange between the Huckabee bigots among the evangelicals, on the one hand, and Romney-the-opportunist, on the other--between assertions of a "Christian presidency" and the dismaying response of "conservative multiculturalism"--might seem to many to be a struggle merely within the loopy, irrational religious backwoods of the Republican party. It is not. It is about this country and the rest of us and our long-term relationship to liberal toleration at its hour of grave need--and that is why Romney's wrong answer to the wrong question is so very, very dispiriting.

Most Americans can't name the religion of our greatest presidents. George Washington? Abraham Lincoln? Franklin D. Roosevelt? Ronald Reagan? At least two of those four weren't regular churchgoers. One had no religious affiliation at all.

They shared this common denominator, which contributed to their greatness: They were all men with strong moral convictions, shaped by their upbringing. They all had a healthy appreciation of the need for the separation of church and state, and they probably wouldn't be surprised to learn that in 2007, Americans who attend church on any given Sunday are actually in the minority - about 40 percent.

Contrast that to the campaigns of Huckabee and Romney.

A long tradition in Catholic theology that accepts civil law cannot incorporate the church’s moral teaching when no consensus exists in society to enforce it. In the end it is for politicians to weigh their moral convictions against what can realistically be achieved and accepted by society and act accordingly.

Societies do need a common core of moral values to unite them. In both and many of these values are derived from Christianity and Romney is right to claim he shares them. But in neither country is there widespread acceptance of a total ban on abortion.

As so often, the framers and founding fathers meant what they said, said what they meant, and risked no waste of words. A candidate for election, or an applicant for a post in the bureaucracy, could not be disqualified on the grounds of his personal faith in any god (or his disbelief in any god, for that matter). This stipulation was designed to put an end to the hideous practice of European monarchies—and the pre-existing practice of various American colonies—whereby if a man did not affirm the trinity, or deny the pope, or abjure Judaism (depending on the jurisdiction), he could be forbidden to hold office or even to run for it. Along with the establishment clause of the First Amendment, and the predecessor-language of the Virginia Statute on Religious Freedom, it forms part of the chief glory of the first-ever constitution that guaranteed religious liberty, religious pluralism, and the freedom to be left alone by priests and rabbis and mullahs and other characters.

However, what Article VI [of the Constitution] does not do, and was never intended to do, is deny me the right to say, as loudly as I may choose, that I will on no account vote for a smirking hick like Mike Huckabee, who is an unusually stupid primate but who does not have the elementary intelligence to recognize the fact that this is what he is. My right to say and believe that is already guaranteed to me by the First Amendment. And the right of Huckabee to win the election and fill the White House with morons like himself is unaffected by my expression of an opinion.