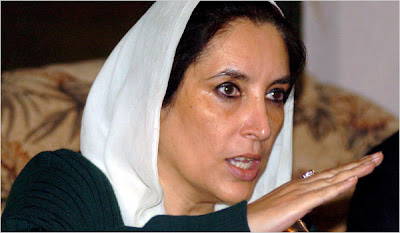 Let's put a few things in perspective before we mourn the passing of Pakistani opposition leader Benazir Bhutto, who was assassinated by a gunman prior to a suicide bombing today that took 20 lives at a campaign rally in . An earlier attempt on her life killed 140 people in October shortly after she returned from exile.

It speaks volumes that:

* Bhutto, who herself was duplicitous and corrupt as the leader of this troubled nation, nevertheless was seen as a vast improvement over President Pervez Musharaff.

The Bush administration not only has thrown in its lot with Musharaff as its key regional ally, but has repeatedly helped prop up his repressive regime, pouring billions of dollars into a rat hole that has become a safe haven for the very terrorists both nations profess to want to eradicate, while claiming that great strides are being made in heartland of the Global War on Terror.

Other than obligatory tut-tutting, the assassination will have no impact on the . Foreign policy generally and the s deeply troubled relationship with specifically are pretty much non starters in this topsy-turvy campaign season.

The immediate upshot of Bhutto's assassination will be that it gives Musharaff a convenient excuse to postpone parliamentary elections scheduled for next month.

Her death comes just days after Musharraf lifted a state of emergency that he had used to suspend the Constitution and arrest thousands of political opponents on the largely spurious claim that they were terrorist threats.

Bhutto, warts and all, was widely seen as an appealing alternative to Musharraf and eight years of military rule in a supposed democracy, but her tragic passing will have little effect.

It will continue to be business as usual in and . You can bet on it.

Posted by Shaun Mullen at 10:52 AM
Email ThisBlogThis!Share to TwitterShare to FacebookShare to Pinterest

Other than obligatory tut-tutting, the assassination will have no impact on the U.S. presidential race. Foreign policy generally and the U.S.'s deeply troubled relationship with Pakistan specifically are pretty much non starters in this topsy-turvy campaign season.

Unless, of course, this turns into THE destabilizing event for the current Pakistani government, the country begins to balkanize and the control of Pakistans nuclear force comes into question. Would the Chinese become involved in this case? Grounds for the Bush administration to declare martial law? Further suspend the constitution? Postpone elections?

Hopefully this is far-fetched, but Bushco no longer shocks, only surprises.