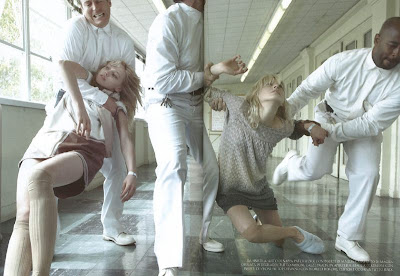 Why all the fascination with celebrity downfall? More here.

Set aside for a moment the baldfaced Bush lie that Al Qaeda accounts for more than a sliver of the terrorism in . Ignore the convenient Bush amnesia of the cause for Al Qaeda's presence in : his own invasion-of-choice. Forget the absurdity of fight-them-there-so-they-won't-fight-us-here: a defeat of Al Qaeda in Iraq, even if it were militarily and politically possible, even if we were willing to spill all the blood and spend all the treasure required to accomplish it, will not cause the cells of terrorists already in America to disband, nor will it so bum, depress or demoralize the ferocious jihadists already plotting against us in encampments and networks around the world that they will abandon their zeal for revenge and seek new careers in hedge fund management or search engine design.

Instead, focus on the likelihood of another 9/11 in America, even if Bush prevails in handing the Iraq war to his successor, even if the Cheney-Kristol wing of the Republican Party gets all it wants from this and future Congresses, even if Joe Lieberman gets his war in Iran, even if Rudy Giuliani gets to wear macho-man drag as our next President, even if someone produces Osama Bin Laden's head on a pike -- or even, alas, if an American withdrawal begins in September or March or in January, 2009. No matter what happens next in , something terrible is going to happen in .

This is not defeatism. It is facing reality. I wish there were enough money to secure all our ports and infrastructure; to lower to zero the probability that the A.Q. Khan network, or some purveyor of ex-Soviet loose nukes, could penetrate our border with an atomic device; that bioterrorism could be decisively prevented by counterterrorism; that jihadi malaise, or Obamian public diplomacy, or whatever other cure for global hatred you favor, could conquer the evil that George W. Bush pretends he can deliver us from.

Sixty years ago this month, writing under the byline of X, George Kennan supposedly laid out America’s cold war foreign policy. Kennan’s essay is often said to be the most influential article in the history of this country’s foreign policy, but neither Harry Truman, nor any president after him, actually followed X’s recommendations. "Containment," the word the essay introduced, was applied in a bellicose way that Kennan didn’t intend.

But while Truman dodged X’s advice, George W. Bush should follow it. Kennan was wrong about how we would win the cold war, but right about how to fight the war on terrorism.

Obama is different. He wasn't mugged by the 1980s and 1990s as was. He doesn't carry within him the liberal self-hatred and self-doubt that does. The traumatized Democrats fear the majority of Americans are bigoted, know-nothing, racist rubes from whom they need to conceal their true feelings and views. The non-traumatized Democrats are able to say what they think, make their case to potential supporters and act, well, like Republicans acted in the 1980s and 1990s. The choice between Clinton and Obama is the choice between a defensive crouch and a confident engagement. It is the choice between someone who lost their beliefs in a welter of fear; and someone who has faith that his worldview can persuade a majority.

In my view, the call is not a close one.

If were the drowsy southern town that Warren Harding and Calvin Coolidge rode into, Ron Paul would have a chance.

Poverty, hunger and public health continue to worsen in Iraq, according to a report released by Oxfam International, which says that more aid is needed from abroad and calls on the Iraqi government to decentralize the distribution of food and medical supplies.

-- DAMIEN CAVE
The War on Cancer is more than 30 years old, having been announced by Richard Nixon during his first term and actually getting up some steam during Nixon’s second term. Some progress has been made but not as much as might have been hoped considering the billions that have been invested.

I don’t object to government-funded research per se but I’m skeptical as to whether large scale government funding of medical research actually results in more research being done. Medicine is a special case—the supply of doctors doesn’t rise as a result of increased funding the way that the supply of electrical engineers rose, for example, as a result of the space program.

Let me get this straight. Ingmar Bergman never won on Oscar but Jennifer Hudson has? Any other reasons why we should never, ever take the Oscars seriously again?

I saw (Ingmar Bergman's) Persona with my aunt Terez who was wearing a hat with practically an entire pheasant sewn onto it. The Notre Dame students behind us kept saying, "I don’t get it, this is nuts, what’s this movie about?" Terez, who had just learned to speak some English kept saying "Shhhh, eets abowt drrreems. Go to sleep and you’ll understand it."

This is what Bergman himself, the grand mind of another time and place, said: "Film as dream, film as music. No art passes our conscience in the way film does, and goes directly to our feelings, deep down into the dark rooms of our souls."

His crown was not like some directors, massively laden with tormentuous gems of a zillion gleams, but really, just a handful, a bracelet of films, most igneous . . . like The Seventh Seal, a dream about the time of the Plague and the Crusades and Death being challenged by a Knight at the river to play an intermittent game of chess over a long period of time, a black and white film that near any frame would be considered art for the walls of any museum of future-past. The film is drowned like a pre-Raphaelite Ophelia in slimy water with fresh flowers floating by . . . the symbols, related to spirit and death and life, are, well, rife with pagan and Christian leitmotifs. Yet Bergman said: "I hope I never get so old I get religious." He was dreaming in his film, that’s for certain.