The Media: How Now Dow Jones? 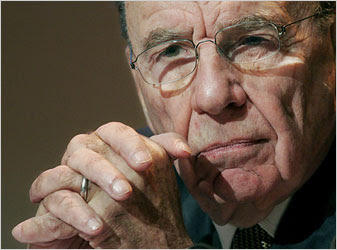 If I had picked up my morning newspaper a few years ago and read that Rupert Murdoch had bought Dow Jones & Company, publisher of the Wall Street Journal, I would have sneezed coffee through my nose and then collapsed to the floor with heart spasms.

But times have changed, and while it still is a bit off putting that a conservative media mogul who has built his empire on sleaze and scandal is buying the owner of one of the most respected brands in mainstream media for a cool $5 billion, that transaction simply does not deliver the shock value it would have even five years ago.

But have times changed for the better?

I certainly should be able to provide a definitive answer as an ink-stained wretch who toiled in the trenches of daily journalism for over 35 years and looked on in horror as my last paper become a shell of its former self because the owners were much more concerned about their company’s share price than the quality of the product.

Alas, I cannot say things are better or worse.

What I can say is that from a market perspective, the shakeout in the MSM is long overdue, and editors long oblivious to market forces – including the advent of the Internet and later the blogosphere — are getting their comeuppance from sea to shining sea.

What I also can say is that from a content perspective, the shakeout has made some MSM outlets better but others not so. While there is substantially more variety for readers and viewers, much of it is the celebrity-driven piffle that is Murdoch’s coin of the realm, while the MSM has not exactly covered itself in glory in covering the biggest story of the young millennium – the Iraq war.

What I also can say is the acquisition of The Journal, along with the planned launch of the Fox business news channel by Murdoch's News Corporation, makes him the most formidable figure in business news in the country, and that is scary. Very scary, given the unapologetically conservative spin the Fox News channel puts on everything it touches.


Photo by Mark Lenihan/The Associated Press
Posted by Shaun Mullen at 12:49 PM
Email ThisBlogThis!Share to TwitterShare to FacebookShare to Pinterest

Murdock may well do us all a favor if he, as seems likely, trashes the WSJ sufficiently that no one takes it seriously anymore.

I quit reading it a decade ago when it became obvious that the reporting was slanted at least as much as the editorials and was not to be trusted.