Shinichi's Trike & The Lessons of War 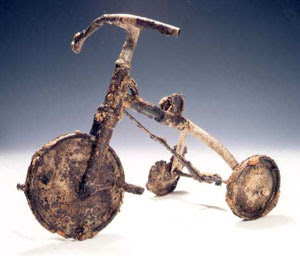 Shinichi Tetsutani loved to ride his beloved tricycle outside his house in Higashi-Hakushima-Cho, a neighborhood in the Japanese port city of .

Shin-chan, as his family called the three-year-old, was doing just that on the morning of , when there was a brilliant flash in the sky.

Shin was about a quarter mile from the hypocenter of the detonation of the first nuclear weapon to be used in anger, the consequence of a frightening new technology that its creators were all too aware would change warfare -- and civilization -- forever by wreaking unimaginable death and destruction.

Shin died that night, one of about 140,000 people to perish in the atomic bomb explosion and from associated effects, principally radiation poisoning. Three days later, a second bomb was dropped on , taking about 74,000 lives. , the original target of the first bomb, was spared because the government officials and generals who were desperate to end the war were sensitive of its cultural significance.

A third atomic bomb was being readied, but by August 15 the conciliators in the Japanese government had won out over hard-line militarists who had had the tacit backing of Emperor Hirohito, who was not the pitfully manipulated figurehead the Japanese claim, and was the villian of this story. In any event, Japan capitulated and World War II finally was over after some 234,874 Americans had lost their lives in the Pacific theater alone.


* * * * *
There is no military-political action in modern history laden with as much baggage as President Truman’s decision to use the atomic bomb.

Those who have argued in favor of his decision offer these arguments:

* Millions of people under Japanese occupation in The Philippines, , and elsewhere who faced starvation, including hundreds of thousands of POWs from the U.S., Britain, Australia, New Zealand and the Netherlands, were freed.

* hard-line militarists had adamantly refused to surrender although it was obvious that the war was lost.

Those who have argued against his decision offer these arguments:

* The bombings were immoral, a crime against humanity and constituted genocide.

* In a contemporary context, they were an act of terrorism.

* They were militarily unnecessary because was essentially defeated and ready to surrender.

* * * * *
The Hiroshima is situated at one end of a park. At the other end is Ground Zero and the so-called A-Bomb Dome, the concrete and wire framework of a domed government building that was destroyed in the blast. I saw Shin’s trike on my first visit to the museum and it is seared in my memory much like the frozen hands on a pocket watch in an adjoining exhibit that will forever read , the moment that the atomic bomb exploded.

My second visit to Hiroshima included an extensive tour of the hospital and laboratories of the Atomic Bomb Casualty Commission, which was established and funded by the U.S. in 1948 in an act both altruistic and a reflection of the need to better understand the horrors visited upon Hiroshima and Nagasaki.

For the next 36 years, the commission studied the latent effects of radiation among the bomb survivors, including the outcome of pregnancies one and two generations later. As sobering as the tour was, the trip ended on a delightfully memorable note: A side trip to an island in Hiroshima Bay where the famed oysters of the region -– the most delicious that I have ever eaten in a lifetime of world travels -- had just been declared safe to consume for the first time since the end of the war.

I would have been unprepared for the gracious reception I received in had I not befriended Hiroshi, a native of the city who ran a small bar near my apartment in the Roppongi neighborhood of . On some nights I would stay after the bar closed, leaving from a secret door that led to a narrow back alley after she would regale me with stories about being a teenager during the war whose military family had been evacuated to the country.

It was Hiroshi’s view that few Japanese felt enmity toward the for the atomic bombings, as well as the firebombings that incinerated and so many other cities that few relatively unscathed targets on the Japanese mainland by August 1945.

While I did occasionally experience hostility, usually in small villages well off the beaten track, Hiroshi was right. Although they would never admit it to a gaijin (foreigner), most Japanese were well aware that their government, in the thrall of those hard-liners, had started a war that brought out worst in them. The payback was a bitch, of course, but the Japanese who have toiled to remember the bombings -- from putting Shin's trike on display to working to try to insure that there are no more Hiroshimas and Nagasakis -- have brought out the best in them.

* * * * *
The question of whether it will ever be justified to visit the horrors of Hiroshima and Nagasaki upon a sworn enemy of the U.S. rages anew for the first time since the Cold War following Barack Obama’s declaration last week that he would not use such weapons to fight Al Qaeda in Afghanistan and Pakistan.

I happen to think that is a no brainer. Even using tactical nukes against terrorists is inane and should never be part of a counterinsurgency playbook (although it was considered in Vietnam). Hillary Clinton’s rejoinder that Obama should not rule out the so-called doomsday option was even sillier given the context.

But that is not the point.

The point is that in my humble view, President Truman made the right decision in 1945 under circumstances so extraordinary that it is difficult to imagine them being replicated at some future time.

I pray that I am not wrong.

As did Dame Edith Sitwell, that shock trooper of the poetic avant garde who wrote of in her "Three Poems of the Atomic Age."

I leave you with an excerpt from the second poem, "The Shadow of Cain":

. . . there came a roar as if the Sun and Earth had come together--

The Sun descending and the Earth ascending

To take its place above . . . the Primal Matter

Was broken, the womb from which all life began,

Then to the murdered Sun a totem pole of dust arose

One consideration that I think should be included in those offered in support of using The Bomb is that it resulted in significantly lower loss of Japanese lives than would have been lost in a U. S. invasion of the Japanese mainland. Such an invasion would have been inevitable in the absence of the Emperor's nearly unprecedented announcement of surrender.

For many years I thought that there were other, better alternatives but on reflection I've arrived at the conclusion that, although terrible, using The Bomb on Hiroshima was the best of the available alternatives.

I don't think the same argument can be made with respect to Nagasaki.

The question of whether the Nagasaki bomb should have been dropped is a good example that there is ample evidence in the historic record to support all shades of opinion.

It is the view of some people that the second bomb was dropped merely to test a second design. It is my view that the bomb was dropped because in the 72 hours between the Hiroshima and Nagasaki bombings, there was very little indication through all monitored diplomatic channels that the Japanese were coming around to surrendering. In fact, most of the diplomatic traffic concerned Japan trying to get the Soviet Union to not enter the war in the Pacific so it could continue to fight the white Americans devils.

People attribute way too much significance to the atomic bomb, as if all of war and hell can now be tidily wrapped up into a neat little package to approriately loathe. But what about napalm, artillery, missiles, guns, knives, etc etc. What about starvation and famine and malnutrition and disease, big winners in any war? Suddenly the issue is more complex even though more people have and will die from these things than the atomic bomb. Which after all, is one bomb capable of so much destruction. 10,000 napalm firebombs can't possibily compare to it. Just ask the cities of Dresden, Berlin, Tokyo, etc. Oh wait, they weren't nuked because they had already been bombed to the ground, along with 1000s more toddlers on tricycles.

Anyone against the strategic wisdom of Truman's decision has been suckered by Japanese war apologists, IMO.

Reason.com linked here and I'll just post what I commented there since it applies, in my opinion:

I almost got into fist fights in college arguing over the morality of the decision to drop nuclear weapons on Japanese civilians. I think people need some context and background on this issue.

Check out Gar Alperovit'z tome on the subject, The Decision To Use The Atomic bomb.

I wrote a paper on the subject in school (said paper is now gone), and Alperovitz provides an exhaustive review of the matter. His arguments are very clearly stated and in my mind pretty hard to refute. He documents how the number of so-called lives saved by the use of nuclear weapons was consciously manipulated and inflated after the fact as justification for dropping the bomb, from at first a hundred thousand or so to eventually a million.

Two weeks before the bombing of Hiroshima, Japan offered surrender with terms, including that they keep their emperor. Roosevelt wanted unconditional surrender, and the U.S. policy was to reject any offer unless it was for unconditional surrender. Truman, after dropping the bombs, eventually accepted the Japanese surrender, but with the same terms they had offered before he dropped the bombs. It is argued that Truman was unaware of these surrender offers before he made his decision.

For a look at the human cost of the nuclear bombs, I suggest you check out Grave of the Fireflies.