Deja Vu All Over Again With Rummy 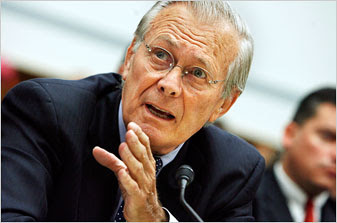 It was like old times as former Donald Rumsfeld settled into the witness seat in a committee room on Capitol Hill this morning.

* He took no personal responsibility for the cover-up of the circumstances behind the death of Corporal Pat Tillman, whom the Pentagon initially said died defending his comrades against an enemy militia in Afghanistan.

* He said that he always told his subordinates to be truthful, so of course they were.

* He evaded the primary reason that Representative Henry Waxman had called the hearing — to ascertain when the White House learned of the coverup of the fact that Tillman died from friendly fire, or has recently been revealed, possibly was murdered.

Lying about not lying? Check.

The hearing came a day after the Army laid most of the blame for the response to Tillman’s death on Philip Kensinger, a retired three-star general who led Army special operations forces after the 9/11 attacks.

The Army censured Kensinger for "a failure of leadership" and accused him of lying to investigators probing the aftermath of Tillman’s death.

Army Secretary Pete Geren insisted, however, that there was no intentional Pentagon cover-up, and he rejected a suggestion that Rumsfeld knew the circumstances of Tillman’s death before that information became public.

Photo by Chip Somodavilla/Getty Images
Posted by Shaun Mullen at 12:45 PM
Email ThisBlogThis!Share to TwitterShare to FacebookShare to Pinterest