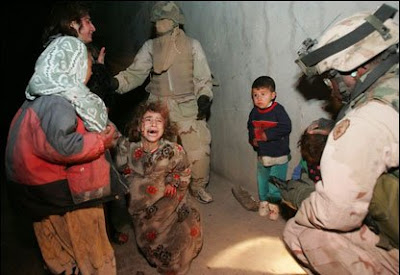 The war is over bar the shouting. Their parents are dead.

White House officials fear that the last pillars of political support among Senate Republicans for President Bush’s Iraq strategy are collapsing around them, according to several administration officials and outsiders they are consulting. They say that inside the administration, debate is intensifying over whether Mr. Bush should try to prevent more defections by announcing his intention to begin a gradual withdrawal of American troops from the high-casualty neighborhoods of Baghdad and other cities.

The U.S. Senate has long been derisively characterized as the , because the august members of the upper chamber tend to talk a good game without actually doing anything. Bear this in mind while watching the parade of Republican senators who seem eager to declare their rhetorical independence from President Bush and his ruinous war.

For all the talk from Republican senators about their willingness to embrace a significant change in war policy, Senate Majority Leader Harry Reid is going to give them a chance to put their votes where their mouths are.

The truth is that Karl Rove is probably right, and Republican whiners are quite wrong. The White House is not in any difficulty with respect to . That would only be the case if a significant number of Republicans thought that doing the right thing was more important than fealty to Dear Leader. But that isn't the case, and it isn't likely to be the case. The White House will keep doing what it's doing, Republicans will fail to join with Democrats to oppose them, the occupation of Iraq will continue, Republicans will lose many House and Senate seats, and, with a little luck, the presidency.

The Iraqi government is unlikely to meet any of the political and security goals or timelines President Bush set for it in January when he announced a major shift in policy, according to senior administration officials closely involved in the matter. As they prepare an interim report due next week, officials are marshaling alternative evidence of progress to persuade Congress to continue supporting the war.

The death toll from a suicide truck bombing in a remote village in northern Iraq rose to around 150 on Sunday, making it one of the deadliest single bombings, if not the deadliest, since the 2003 invasion.

The attack, in the impoverished Shiite Turkmen , 100 miles north of in , has highlighted fears that Sunni insurgents facing military crackdowns in and are simply directing their attacks to areas outside the concentration of American troops.

could descend into full-scale civil war if US troops are withdrawn, the country's foreign minister said today, following reports that the Bush administration is debating the removal of American forces.

The U.S. command in Baghdad . . . ballyhooed the killing of a key Al Qaeda leader but later admitted that the military had declared him dead a year ago.

Until only a few months ago, the bazaar was enemy territory, watched over by American machine-gunners in sandbagged bunkers on the roof of the governor’s building across the road. Ramadi was ’s most dangerous city, and the area around the building the most deadly place in Ramadi. Now, a pact between local tribal sheiks and American commanders has sent thousands of young Iraqis from into the fight against extremists linked to Al Qaeda in . The deal has all but ended the fighting in Ramadi and recast the city as a symbol of hope that the tide of the war may yet be reversed to favor the Americans and their Iraqi allies.

When four Blackwater security guards were ambushed and massacred in Fallujah in 2004, graphic images showed the world exactly what happened: four men killed, their bodies burned and dragged through the streets. A chanting mob hung two mutilated corpses from a bridge.

Since then, Congress and the families of the murdered private security contractors have been demanding answers: Why did the lightly armed and undermanned team go through the heart of one of 's most hostile cities? Why did the two teams sent out that day have four members, not the usual six?

Some answers can be found in memos from a second team for Blackwater operating around Fallujah on .

Blackwater, based in , sent two squads through Fallujah without maps, according to memos obtained by The News & Observer. Both of the six-man teams, named Bravo 2 and November 1, were sent out two men short, leaving them more vulnerable to ambush.

Murray Kempton, a great journalist of the century past, once wrote, "There is a certain kind of politician who stays safely in the hills during a battle and then comes down and shoots the wounded."

It’s painful to apply this to Colin Powell. I admire him in so many ways, but there is no other way to describe what he is doing now. Long after his speaking out or resigning could have made a difference, he is now telling us how hard he tried to persuade George W. Bush not to invade .

"I tried to avoid this war," Powell told the Aspen Ideas Festival in . . . "I took him through the consequences of going into an Arab country and becoming the occupiers."

Posted by Shaun Mullen at 4:43 AM
Email ThisBlogThis!Share to TwitterShare to FacebookShare to Pinterest