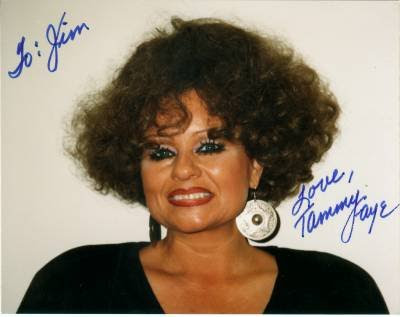 As someone with strong (and sometimes too strong) opinions about people, I was surprised at how sad I felt when I read in May that Tammy Faye Bakker Messner had decided to stop taking treatments for the cancer that was well on the way to killing her.

Why, I asked myself, would I feel common ground with the mascara-impaired wife of a televangelist who had famously cried for the cameras when her hubbo got caught with his pants down?

First of all, because anyone who has had to battle cancer has my sympathy, but more importantly because I believe that behind all that eye shadow and caricaturizing was a deeply decent person whose love of her God and his flock was genuine.

After her split from Jimbo, she went on to become a gay-rights advocate, which is so ironic since a gay friend tells me that she has been huge in the drag community since forever. She worked with trouble youths and was harshly critical of the hypocrisy of the church that made her famous and wealthy.

So it turns out that Tammy Faye was my kind of gal after all. May she rest in peace.