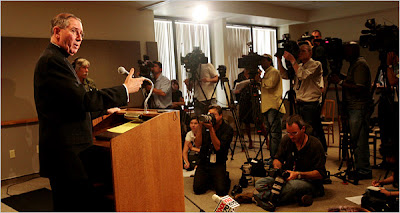 In the interests of full disclosure, I inherited some fairly heavy baggage when it comes to the Roman Catholic Church.

My father attended a parochial school for 12 years and dutifully returned the favor as an altar boy when he was younger and as a star football player when he was older. But when it came time to get hitched, he had the temerity to want to marry a woman whose father was a Jew in a church ceremony and the local diocese said "No way, Jose."

So my parents were married in an assistant parish priest's office on a weekday afternoon to the unwelcome accompaniment of a Hopalong Cassidy record being played at full volume in the adjoining office of an elderly priest who was nearly deaf.

Although my siblings and I were given a religious upbringing and required to attend church and Sunday school, my father would have rather walked on hot coals than exposed us to the Catholic Church, which when we were old enough to understand he would refer to as "that enormous guilt machine." And so I come to the ongoing pedophile priest scandal with enormous sympathy for the victims and none whatsoever for the church.

Note that I say ongoing because there is little indication that the church has learned anything from the scandal other than to mouth insincere platitudes at press conferences and hire the best lawyers that their parishioners' collection plate offerings can buy to push back against the many thousands of young innocents who have been fondled, fellated and sodomized with the knowledge -- which is to say tacit approval -- of an imperious church hierarchy all the way up to the Vatican.

This sordid attitude has been on full display in , the largest Catholic archdiocese in the

Cardinal Roger Mahony certainly seemed to be contrite in making the obligatory apologies in announcing a $660 million settlement for more than 500 victims of sexual abuse by his clergymen, but it is the back story that tells the true tale.

Mahony caved in to the plaintiffs' lawyers after four years of fighting back against the victims, thereby adding to their guilt and prolonging their suffering, and only then because he would have to soil his cardinal's robes by having to testify at trial.

The settlement, under which each victim will received about $1.3 million for treatment and therapy, seems appropriate. But it carries with it a another price: A guarantee of silence from the victims and a bar against the archdiocese having to hand over incriminating documents, let alone cleaning its Augean stables.

"All along, the Los Angeles Archdiocese — which was once compared to La Cosa Nostra by the head of a Catholic review board — had one primary objective.

"The truth? Not a chance.

"Justice? Forget about it.

"Keep Mahony off the stand.

"Under oath, he would have been forced to explain exactly what he knew about the scandal and what he did, or didn't do, in response.

"Apparently, that's not something the cardinal wants anyone ever to know.

Meanwhile, it's obvious from the Vatican's response to the settlement that it still doesn't get it: A spokesman harrumphed that sexual abuse of children is not just a Catholic Church problem and other faiths should take steps to acknowledge and deal with such "wickedness" within their own ranks.


The Catholic Church in does many fine things. I refer specifically to its network of inner city schools, in many places the only opportunity for children of color to get a decent education.

The church has paid out over $2 billion for its pedophile sins so far with more payments to come. It has made some efforts to weed out or get help for its troubled priests.

But just think of what that $2 billion could be used for had it not encouraged a culture of depravity and then covered up it up.

Photograph by Monica Almeda/The New York Times
Posted by Shaun Mullen at 10:37 AM
Email ThisBlogThis!Share to TwitterShare to FacebookShare to Pinterest

In search of Papal logic
One of the Church's Papal blessed apologia denial statements was that the incident of abuse by Priests was statistically the same as the greater population.
Stand that up aginst the Pope's latest call for World Peace in his recent commentary that "If you're not Catholic, you suck."