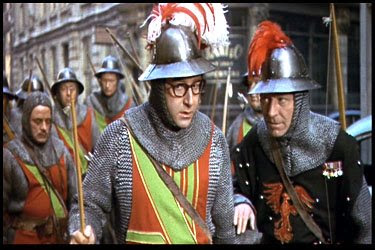 Portland and Seattle are secure, sire. On to Vegas and Reno!

The straw currently being grasped at by George Bush and the stay-the-course crowd is that forces have made big inroads among the Sunni tribes in , who instead of fighting among themselves are being bribed . . . er, financed to fight Al Qaeda. And this success can be replicated elsewhere in , which will lead to peace, an American troop drawdown and Hollywood ending.

That’s all well and good, and I’ll take good news wherever it rears its head, but let’s put this development in context.

Close your eyes for a moment. (No peeking!)

Consider that is the and the has been awash in sectarian violence, say, between Protestants and Catholics. This second American civil war has taken many thousands of lives as the result of an invasion by the European Union that toppled a despotic non-sectarian president who was threatening the world's paté de foie gras supply, but was followed by a horribly botched occupation.

The EU installed a handpicked Protestant in the despot's place, but he is widely seen as almost as big a loser

The EU news media called this a civil war, but this was vigorously denied by the EU bigs even after big Protestant churches and Catholic cathedrals started being blown up with bombmaking materials stolen right out from under the EU occupiers’ noses. Then that holiest of holy shrines -- Cinderella's Castle at Disney World -- went kaboom, blown to smithereens by martyrs who wished to join the 72 Virginians in heaven.

The folks back on the Continent, especially those damned French, have run out of patience as one strategy and deadline after another come and go and are demanding that their troops be brought home.

In a desperate effort to try to begin to put an end to the civil war, the EU forces have been bribing the good burghers of the Pacific Northwest, who are all Catholics, to stop fighting among themselves, and make nice. And most important of all, to oust the Latin Mass hardliners who hate just about everybody but insist on stirring things up among their less parochial brethren who have been doing stuff like using birth control and eating fish on Fridays.

Even though the Catholics in the Pacific Northwest hate the EU occupiers, too, the pacification plan has been working pretty well as long as bags full of Euros, as well as German SUVs and Italian designer sunglasses, have kept coming.

The big question now is whether the Pacific Northwest model can be "exported" to the rest of the U.S.

This is going to be a bitch and a half because once you’re outside of the , the rest of the Lower 48 is majority Protestant but has a sizeable Catholic minority, and both are in way too foul a mood to be bribed with EU lucre.

(If you must know, and are entirely Jewish. They’ve been humming along quite nicely and doing a bang-up job of minding their own business since the invasion.)

The big Protestant cities outside the Pacific Northwest will be especially difficult to pacify. This is because efforts by the EU troops to get the Protestants and Catholics to stop blowing each other up have been undermined by the Protestant government and its sectarian police forces, which keep locking horns with the Catholic posses. The only thing that has worked is building walls, which has played havoc with the Little League season and “American Idol,” which has been forced to go to reruns.

Okay, you can open your eyes. All the way now.