I Got Dem Counterinsurgency Blues Again, Mama: Or How Iraq Became Vietnam 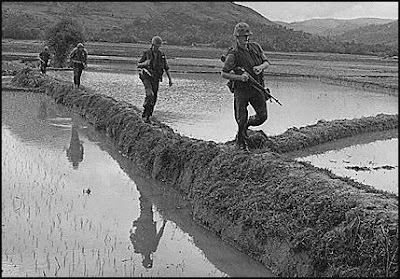 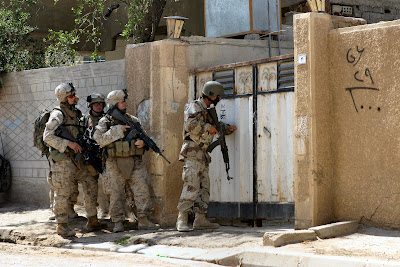 The great war correspondent Bernard Fall understood Vietnam better than the French, whom he predicted would fail in their war against Ho Chi Minh's national liberation movement, as well as the Americans, whom he also predicted would fail although they went about doing so a great deal more creatively.

Fall, who reported from Vietnam from 1953 until he stepped on a landmine in 1967, took no pleasure in being right. He supported both the French and American causes, but he was harshly critical of the U.S.'s failure to learn from France's mistakes, especially its inability to understand the value of counterinsurgency warfare instead of relying on the 1960s version of Shock and Awe.

As Fall's terse equation above this article indicates, counterinsurgency warfare is in essence a multi-pronged effort against insurgent forces -- guerillas, if you will -- the goal of which is to beat them at their own game. Robert the Bruce, Mao Zedong, Josef Broz Tito and Ho, among other legendary figures in the history of warfare, conquered Scotland, China, Yugoslavia and Vietnam, respectively, because they were able to run circles around their foes although they were substantially larger and better equipped.

So it has been with the Sunni insurgency in Iraq.

Although the Bush administration would like you to believe otherwise, those guerrillas have taken far more American lives than highly publicized Al Qaeda bombings, and attacks are at their highest level in four years despite claims that the surge is succeeding.

Bernard Fall would have been saddened but not surprised that the politicians and generals planning the war made a conscious decision to avoid confronting the Ghost of Vietnam Past.

The rank dereliction of Cheney, Rumsfeld, Wolfowitz and Franks -- that is, their fundamental inability to understand the battlefield and what had to happen after the U.S. secured an inevitable victory by conventional means -- becomes more astonishing with every passing year. That dereliction is directly responsible for the catastrophic mess that is Iraq today.

The ghost haunted the first three years-plus of the war until two savvy generals -- General David Petraeus and Lieutenant General Raymond Odierno -- arrived on the scene in the umpteenth change of command ordered by a White House that was finally beginning to understand that bluster was no substitute for results.

Petraeus, who runs the whole show in Iraq, has been a tireless advocate of ditching conventional warfare (or "babysitting a civil war," to use Barack Obama's stinging putdown) in favor of counterinsurgency. Not coincidentally, Petraeus is the man behind the Army's updated manual on same, while it has been up to Odierno, who is in charge of day-to-day operations, to make sure that "all oars are pulling in the same direction," to use a counterinsurgency cliché.

So now that the U.S. command has appeared to have learned from a fundamental mistake, can this new strategy -- the key component of the surge -- succeed?

The answer is complex but ultimately disheartening because Iraq has morphed into another Vietnam insofar as the conduct of the war itself is concerned, and that is not going to be wished away.

* Most senior commanders have been brought up on the tenets of conventional warfare and have no training in counterinsurgency warfare. Large fighting forces and their leaders are simply unable to turn on a dime.

* Besides which, there never were enough troops to mount a successful counterinsurgency and there certainly won’t be enough in the future with the political clock now outrunning the military clock.

* Unlike or , another notable (and in this case successful) post-World War II counterinsurgency effort, the Sunni insurgency is hydra-headed and difficult to define even before outside terrorists are thrown into the mix.

* The much-trumpeted "success" of bringing around some Sunni tribes in to oppose Al Qaeda has been built on quicksand. Their allegiance has been bought and there is no guarantee it will be long term, while strengthening the Sunnis will further antagonize the Shiites, whose government the U.S. supports, and the Kurds, who are the ’s only true allies in . How extraordinary that the U.S. is arming all sides in the civil war.

* Pardon the term, but the "benchmarks" for measuring the success of a counterinsurgency are elusive with victories hard to quantify and even harder to sell to a now deeply discouraged American public. Killing or capturing a bunch of Al Qaeda leaders would be swell, but Al Qaeda is but an infinitesimal part of the insurgency and that would not be the same as crippling the insurgency.

* "Winning hearts and minds," to use another cliché, is an additionally formidable task when basic services like electricity and water remain far below pre-invasion levels because of the continuing ability of insurgents to disrupt them.


* Counterinsurgency warfare is a war of attrition and the insurgents will outlast the Americans.

* Regardless of the outcome of an counterinsurgency, global terrorism continues to grow, further undermining the Bush administration’s contention that we have to beat the bloody bastards over there so they don’t come over here.

* In fact, the presence in is now the single greatest recruiting tool for Al Qaeda. Nice job, Mr. President.

As a student of the great T.E. Lawrence, I am inevitably drawn to his writings on the Arab insurgency against the Turks from 1914-18 so dramatically portrayed in Lawrence of Arabia.

In his entry for "Guerrilla" in the 14th edition of the Encyclopaedia Britannica, Lawrence writes:

" . . . suppose they were an influence, a thing invulnerable, intangible, without front or back, drifting about like a gas? Armies were like plants, immobile as a whole, firm-rooted, nourished through long stems to the head. The Arabs might be a vapour . . . "

As the Sunni insurgents indeed are.

Top photograph by John Fenzel
Posted by Shaun Mullen at 5:23 AM
Email ThisBlogThis!Share to TwitterShare to FacebookShare to Pinterest

Killing and Being Killed in Iraq

The Sunni insurgents are a viable fighting force numbering in the tens of thousands. At no point in our lifetime will they be defeated.
Therefore political accommodations may be made to install peace in Iraq, but there is categorically no 'victory' available.
The enemy we set out to defeat, the forces of Saddam and the Baathists, are still viable and present on the battlefield. We have backed new governing forces, which already reek of Baathist misconduct and which also must accommodate the insurgents politically to survive. There is no victory ever to be had in Iraq.
That the dominant American political civilian overseers (Bush / Cheney / neocons) lack both desire for and any visible skill in negotiating makes the difficult simply impossible.
A sincere best of luck to Gen. Petraeus.