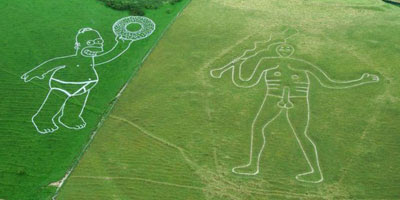 I lie on the beach with Hillary-Ann, a chatty, scatty 35-year-old Californian designer. As she explains the perils of Republican dating, my mind drifts, watching the gentle tide. When I hear her say, "Of course, we need to execute some of these people," I wake up. Who do we need to execute? She runs her fingers through the sand lazily. "A few of these prominent liberals who are trying to demoralise the country," she says. "Just take a couple of these anti-war people off to the gas chamber for treason to show, if you try to bring down America at a time of war, that’s what you’ll get." She squints at the sun and smiles. "Then things'll change."

[T]he potential for bad things to happen after the troops leave -- which I've heard few opponents of the war deny -- is neither here nor there given the obvious inability of the American military to create a strong Iraqi state ex nihilo. The point of the argument, rather, is simply part of the broader war apologist long-term exit strategy: i.e. to shift the blame for the catastrophe from the people who are actually responsible for it to people who tried to stop it.

In his own way, (former Sugeon General Richard Carmona is the poster boy for the Bush administration -- a low-level Colin Powell, another non-quitter, a saluter who went along with the program and now talks more in defense of his own reputation than he ever spoke as an internal critic or, more likely, secret doubter. Such loyalty -- not to principle, conscience or integrity but to the boss -- is as much an essential ingredient for failure as are incorrect intelligence reports or fervid ideology. What Carmona and others like him too often forget is that when it comes to loyalty, they owe it not to the president but to you and me. Last time I looked, we were still the boss.

This time, they've gone too far. A group of 9/11 conspiracy theorists - whackos who deny that jumbo jets brought down the - is on the attack. But their latest target isn't the government, which they claim destroyed the buildings with explosives.

They're using a vicious Internet assault to pick on an elderly widow.

Out here in the by the Sea, the same day (doctor's office) appointment is like winning the lottery. In other words, it doesn't happen to real people. At my GP, nurses and administrators screen everyone who calls to determine if what your complaint is life threatening. If not, you get an appointment one to five days in the future which guarantees that either: 1) You'll be over it or 2) You're dead. Either way, they don't have to treat you. And the response if you happen to disagree with their 20 second diagnosis? "Well then go to the emergency room." Which is just another way of saying, "If you don't mind paying for it out of pocket, you can get all the health care you need."

Hey Virginians! Surely you’ve heard about the new "abusive driver" traffic offense fees recently enacted by our illustrious General Assembly. No? Well, they are outrageous fines levied on top of the normal traffic infraction fees, payable only by residents, for the crassly stated purpose of raising $65 million in yearly revenues for traffic projects. That sounds like a tax, but don’t tell that to those cowardly Republicans in who’d rather pull a wolf in sheep’s clothing by calling an exorbitant tax something else.

(Garrison) Keillor is becoming increasingly crotchety with age, and not in a charming way. His stories are becoming ever more repetitive, but that’s not even my real complaint. He’s been injecting more politics into his shows and especially into his essays, and while I appreciate that he considers himself a Democrat, his whiny and often hypocritical rhetoric is becoming intolerable.

There's plenty to be angry about this summer -- stifling heat, rising gas prices, the quagmire in , vague warnings of a new terrorist strike. I can get mad at any of those revolting developments, but I can't seem to get mad at Barry Bonds.

Everyone else seems to be in high dudgeon over the prickly, sullen man who's about to set the record for home runs. By "everyone" I mean the minority that follows baseball, which lost its status as national pastime long ago. I haven't immersed myself in baseball for years, but I'm paying attention to Bonds's home-run chase. And when he finally hits No. 755 (tying Hank Aaron) and then No. 756 (becoming the greatest of all time), I hope that shows him some love

One of the wackier ideas to have emerged from modern physics is parallel universes. That's right, folks. This universe that we live in may not be the only universe. There may exist an uncountable number of universes, some nearly identical to this one, others wildly different. Even as you read, zillions of new universes may be blossoming into existence.

If these other universes exist, then some of them contain other yous and other mes.

How strange those words look on the page: You and me in the plural. There are no such words in the dictionary. Until recently there have been no such concepts in Western philosophy. But, then again, that other me in that other universe may not be me, by virtue of being there. On the other hand, that parallel me may be more like this me than the me that I will be a moment hence.