Through the Looking Glass With GWB 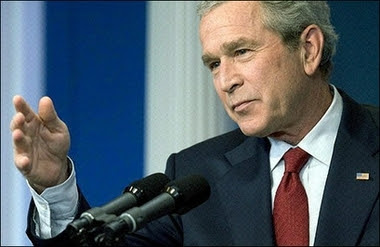 If anyone needed convincing that President Bush is on another planet when it comes to the war – and there still are a few of you out there – Thursday was a keeper.

Astoundingly . . . No wait, at this late date nothing the president says is astounding . . . he asserted at a press conference notable for its Through the Looking Glass quality that "the fight can still be won."

The president again batted aside some tough questions with answers so inane that the Queen of Hearts would have blushed.

The president again cheered the "progress" of an Iraqi government that has met – actually in most cases only partially meet -- less than half of the already watered-down benchmarks for getting its act together so the U.S. can get out.

The president again asserted that Al Qaeda in is the same group that attacked the homeland on 9/11 although its creation was a result of the American invasion. (Meanwhile, the original Al Qaeda has returned to its formerly robust self because its only foe is a NATO-led force in is substantially smaller than the troops chasing the phantoms of that other Al Qaeda in .)

The president again asserted that Al Qaeda is the greatest threat in although his own security bigs rank it well down the list.

The president again scolded Congress for doing its job, which partisan grandstanding aside is a pretty fair approximation of what it is doing these days: Listening to the large and growing majority of Americans who want the troops out now – or at least some sign of an orderly plan to get them out.

And that is exactly what their president refuses to do.

Posted by Shaun Mullen at 7:14 AM
Email ThisBlogThis!Share to TwitterShare to FacebookShare to Pinterest

Bush..Character and Iraq Responsibility
And there was the point in his remarks where he said "I asked the Military (Tommy Franks) if we had enough troops to do the job, including doing the job after we had defeated the Saddam and they said yes."
His Father, the CIA, General Shinseki and Colin Powell told him the truth which he ignored or in the case of the General Shinseki, he fired as he rushed pell mell into the neocon nightmare.
Now he is reconstructing that he at least asked the right questions, that the debacle is not his fault. This is actually quite sad.
If he admits the truth that he, in conjunction with Cheney, Rumsfeld and many others, for reasons still not wholly understood, deliberately went against the advice of the maority of experts then he has to say, "I am to blame."
It is a hell of a choice. He can admit the truth that his plan and planning was incompetent and made America less safe and less respected. Or he can cling to a concocted excuse that once upon a time, after he had slammed all his opposition, that he did ask a General "Do we have enough troops?"
Or he can admit the truth that he, as Commander in Chief, in the end, bears the ultimate responsibility for this horrendous misadventure.
The whole world knew prior to Bush Jr.s' elections that he had in his lifetime established no record of integrity, courage and character.
We should not expect him to display such ethical fortitude now.
It's sad for George W.. It's sad for his family. And it's sad for America and All Americans.