Bless the Danes, Shame on the Americans 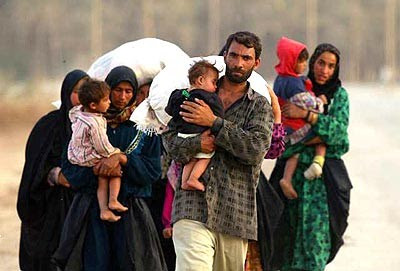 has secretly airlifted about 200 translators and other Iraqi employees of its troops and their relatives ahead of its withdrawal from Iraq, and most are expected to seek asylum.

The Nordic country will withdraw all of its 480 combat troops in August and replace them with a small helicopter unit of 55 soldiers.

Bo Eric Weber, Danish ambassador to , said the operation followed the killing in December of an Iraqi who had worked with the Danes as an interpreter. Around 80 of those flown out of the country were employed and the rest were family members, he said.

Denmark's center-right government had faced mounting pressure to find a way to help the Iraqis despite the country's restrictive immigration policy.

In contrast, the and have been reluctant to take large numbers of Iraqi refugees, who now total some 2 million, and some European countries have toughened their stance on taking them in.

There has been a mere trickle of Iraqis -- about 800 total -- into the since the war began, but officials have promised to take in nearly 7,000 more starting later this year.

That noted, things aren’t likely to get substantially better under refugee legislation being considered by the Greatest Deliberative Body on Earth.

An amendment to the bill designates Christians and other religious minorities as a special category of persecuted peoples, expediting their resettlement in the , but it is being opposed by the Department of Homeland Insecurity because those peoples might include A-Rabs, of which most Aye-Rackis, as well as terrorists, of course are.

This prompted the New Yorker’s George Packer to observe:

"[I]f we can no longer distinguish between Al Qaeda operatives and Iraqis who have risked their lives for the U.S. over a period of years, then we are already helpless to protect ourselves against terrorists. If admitting Muslims is a threat to our body politic, then our social fabric is already too weak to be mended. If the shame of allowing our Iraqi friends to be slaughtered before the eyes of the world is worth whatever security benefits might come from keeping them out, then we have already abandoned our leadership role and should simply tell our allies to stop counting on us."

More here.
Posted by Shaun Mullen at 6:52 AM
Email ThisBlogThis!Share to TwitterShare to FacebookShare to Pinterest