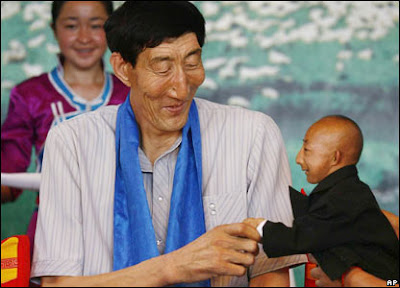 The world's tallest man shakes hands with the world's smallest

The tragic comedy in is beginning to look like an Absurdist revival. George Bush is “Waiting for Godot” while Congress is doing “Rosencrantz and Guildenstern Are Dead.”

Godot is Gen. Petraeus and, as in Beckett’s play, he is unlikely to appear, at least not in the sense the President is expecting. In September, when Petraeus comes on stage, the best Bush can hope for is an ambiguous soliloquy that, as the General has already indicated, measures progress in terms of years, even decades.

Meanwhile, Congress wrestles with a Pinter script of declarations, non-sequiturs, evasions and pauses that seek the certainty of withdrawal but only demonstrate the futility of language.

In a prolonged final act of bitter, chaotic conflict, the actors keep milling around the stage, striking poses and making their speeches but is anyone listening?

What’s left of the audience, even those who applauded the first act, is heading for the exits while the carnage continues offstage.

When Peggy Noonan refers to President Bush as “weird,” you know the wheels have come off the wagon.

These are dark days for conservative Republicans, as they continue to search in vain for an ’08 presidential candidate with purist anti-abortion credentials. Many have latched onto Fred Thompson as a potential savior, and indeed the actor/lobbyist/politician has been trying his best to bond with the purists in the hopes of acing their litmus test.

But, as you may have heard by now, Thompson has run into a bit of a problem in recent days: His past caught up with him. It turned out that, back in 1991, a Washington abortion-rights group hired him to do some lobbying for the abortion-rights cause. The National Family Planning and Reproductive Health Association wanted to get rid of the abortion “gag rule,” which banned abortion counseling at federally-financed clinics, and it thought that the well-connected Thompson might be able to help out. So, according to the minutes of an association board meeting, he was hired.

John Mackey, a co-founder of Whole Foods Market, has never lacked for personality.

He is a self-described vegan and libertarian who pays himself $1 a year as chairman and chief executive and maintains a blog on the company Web site where the posts are occasionally barbed.

As it turns out, that was only the half of it. For seven years, Mackey had an online alter ego.

Using the pseudonym Rahodeb, a variation of Deborah, his wife's name, Mackey typed out more than 1,100 entries on Yahoo Finance's bulletin board over a seven-year period, championing his company's stock and occasionally blasting a rival, Wild Oats Markets.

Like many others, I'm cool to the idea of Rupert Murdoch buying the (Wall Street) Journal. But there is an upside to it. While many professional media observers have the secret decoder manual that tells them to ignore the paper's Neanderthaloid editorial page and only pay attention to the top-notch reportage, most of the Journal's millions of subscribers don't know to make such a distinction, and so the newspaper's terrific reputation also bolsters an unbelievably pernicious and problematic op-ed page, which in turn exerts great influence on the country's monied set (and that set matters). If Murdoch took over the paper and ran its reputation into the ground, we'd lose a lot of good reporting, but the editorial page would also lose influence, becoming something more akin to The Washington Times. I can't decide if, on the whole, sacrificing the news to kill the opinions would be a net benefit or a net loss, but I'm thinking about it.